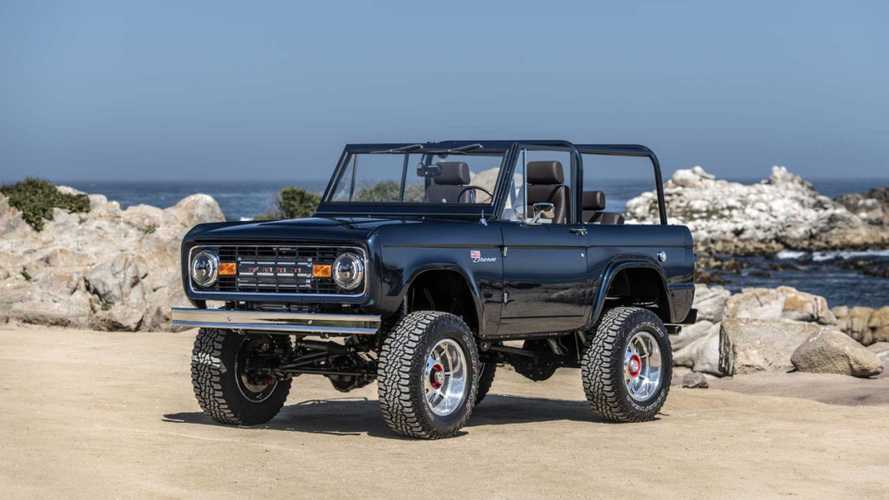 Earlier in the year, Speed Digital (Motorious.com's parent company) client Gateway Bronco announced that it had teamed up with NASCAR racer Ryan Blaney to create a bespoke 1974 Ford Bronco to raise money for charity. This Bronco was auctioned off at Barrett-Jackson Scottsdale this weekend on behalf of the Ryan Blaney Family Foundation where it raised $650,000 for the Alzheimer's Association! Blaney's grandfather, Lou (a former racer himself), suffered from Alzheimer's and passed away in 2009.

This build was first teased at the Barrett-Jackson Northeast event last summer when it was little more than a stripped frame, disassembled drivetrain and a pile of parts. The finished product was unveiled last August at Gordon McCall's Motorworks Revival Event during Monterey Car Week, and the Bronco was on display a couple months later at SEMA.

The finished product is one of the best looking rigs that Gateway Bronco has put together. The monochromatic, dark blue paint job gives this Bronco a sinister look, while the red "Ford" lettering in the grille adds a nice accent. The wheels might be the best part of this build with a modern take on rally wheels and hidden lug nuts for a clean design. No matter who buys this Bronco, they shouldn't have a hard time getting in or out thanks to the power-retractable running boards. Once inside, the cabin is beautifully appointed with door panel inserts that match the seats, wood flooring in the rear and stitched leather on the upper dash and door straps.

Under the hood is a Ford 5.0-liter Coyote V8, and to add a little more kick, a Harrop supercharger is mounted atop the engine. Gateway Bronco adds this supercharger uses the Eaton TVS technology, which is the same as what is used on the all-new 2020 Ford GT500. No word on power figures from the Bronco, but a supercharged Coyote should lay down enough horsepower to make even the bravest of cowboys and cowgirls think twice about riding this Bronco too hard.

Gateway Bronco sat down with the Alzheimer's Association to discuss much more than just classic vintage Broncos, and be sure to check out the videos below for more info on this build:

Gateway Bronco Will Build The Ford Bronco Of Your Dreams