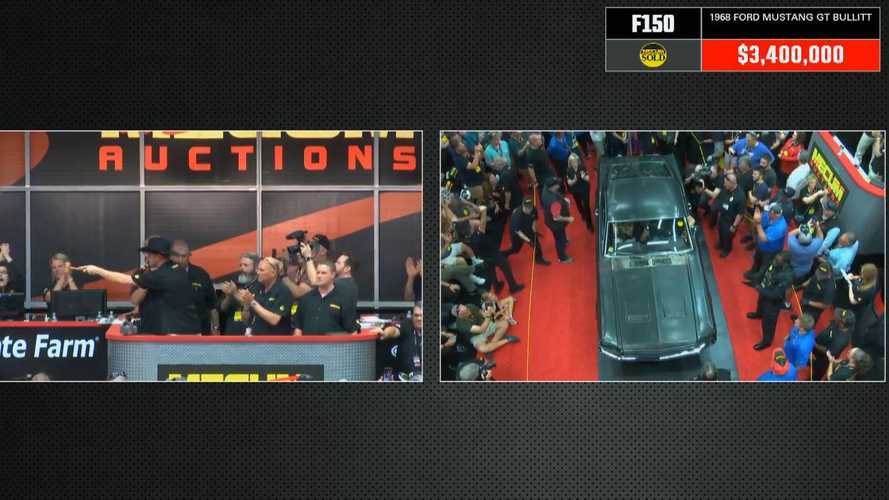 The legendary original Mustang just broke the internet as it crossed the auction block at Mecum in Kissimmee.

The original 1968 Ford Mustang Bullitt is the most iconic movie car of all time, a legend that makes car enthusiasts weak at the knees. This exact Hero Car that was expertly driven by Steve McQueen in the 1968 Bullitt movie produced by Warner Bros. just crossed the auction block just moments ago at Mecum. Most known for its epic car chase with a Dodge Charger through the hilly streets of San Francisco, the car changed car culture as we know it. And it also just broke the internet and shattered records as the most expensive Mustang sold at auction.

It was escorted to the Mecum stage almost like a boxer entering the ring with cheers being heard from the entire crowd. It was an incredible scene as the entire building stood on its feet to watch this legendary car make its way to the spotlight. The bidding started at $3,500 for what it was bought for back in 1974, and it was offered without reserve. The Mustang GT "Bullitt" crossed the Mecum auction block in Kissimmee moments ago with the hammer dropping down at $3,400,000. That would be $3.74 million total considering the 10% buyer premium.

As mentioned above, the Bullitt Mustang just shattered the record for the highest Mustang sold at auction. The last record was held in 2013 by a one-of-one 1967 Shelby GT500 Super Snake that was powered by a 427cui. V-8 engine.

The whereabouts of this car remained a mystery until January of 2017 when the Kiernan family finally brought it out of their Kentucky barn where it hid since 1974. Even close family members and friends had no idea that the family owned the famous car as to keep it a secret. The car still features the camera mounts welded onto the rockers. It features the rebuilt S-code 390cui V8 engine topped with a four-barrel carburetor and backed by a four-speed manual transmission. It is also the 21st vehicle entered into the National Historic Vehicle Register.

Bob Kiernan bought the car back in 1974 for just $3,500 from Road & Track magazine after seeing an ad for the car. Bob's son, Sean Kiernan, acquired the car in 2014 after his father's passing. He decided to bring the Mustang out of hiding and bring it to the 2018 Detroit Auto Show when Ford was debuting their latest version of the Bullitt Mustang.

The car has a letter from Warner Bros that certifies it as the exact car featured in the film. Before the Kiernan family purchased the car, it was owned by Frank Marranca, a New Jersey detective, in 1970. With the car is a letter from Steve McQueen to Robert Kiernan trying to purchase the car but to no avail. Unfortunately, Steve McQueen passed in 1980.