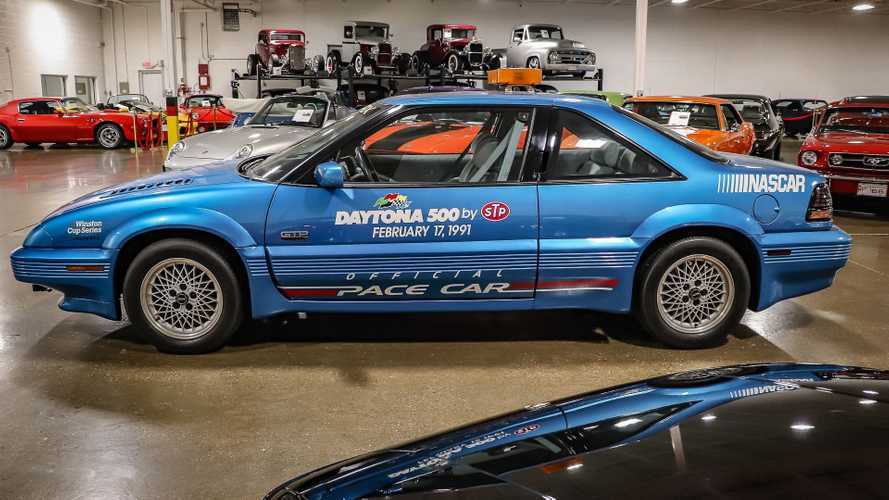 Own this piece of genuine NASCAR history that paced the 1991 Daytona 500.

From NASCAR's inaugural season in 1959 up until 2003, Pontiac acted as the official pace car for the season-opening Daytona 500 in all but nine years. On February 17, 1991, this exact 1991 Pontiac Grand Prix GTP was used for official pace car duty for The Great American Race, and it's now ready to be a museum show piece or join a private collection.

As is the case with some pace cars, this Grand Prix was a preproduction unit and as such comes with a salvage title, but this car is in nearly perfect condition. With less than 10,000 miles on the car, this Grand Prix has definitely lived a pampered life since 1991, and it would appear the only flaws on this car are some scrapes under the nose. Other than that, this 1991 Pontiac Grand Prix GTP looks practically brand new inside and out.

This 1991 Pontiac Grand Prix GTP pace car looks amazing with its Neon Blue Metallic and Pontiac's signature snowflake wheels, and this pace car is rocking old-school NASCAR Winston Cup graphics and requisite strobe light bar on top. Other than these minor changes for pace car duty, this Grand Prix is factory fresh, and it's a fully loaded model with options that include the digital head-up display unit.

For 1991, the Grand Prix delivered a host of changes including restyled front end with the slim headlights, but the big news was the new GTP model with a 3.4-liter V6 under the hood. With the five-speed manual transmission (as this car has), this engine is rated at 210 horsepower, which is just 35 hp less than the '91 Camaro Z28.

This immaculate piece of Daytona 500 history is being sold through Garage Kept Motors for $23,500. The condition alone makes this car an incredible find at that price, but you always can click HERE to make an offer.