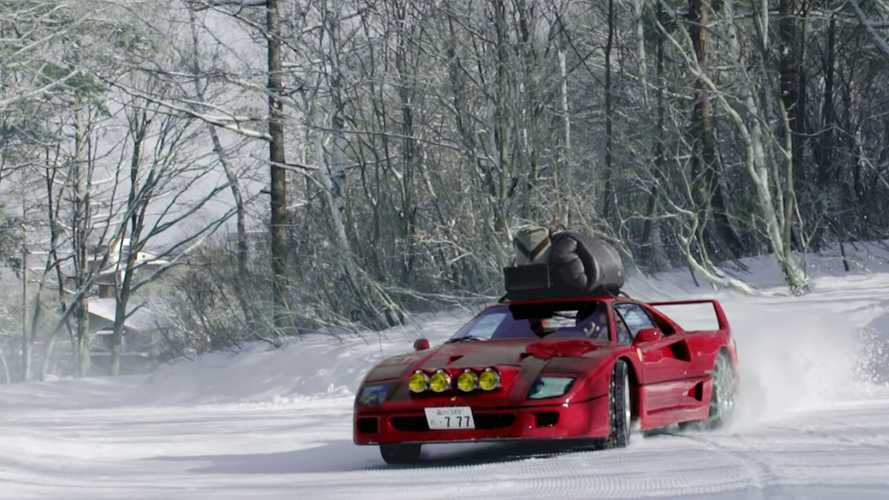 Who needs a winter beater when you have a Ferrari F40 and tire chains?

One of the worst parts about owning a classic or collector car in an area that gets snow is that you usually can't enjoy the car during the winter months. Takeshi Kimura, team owner for Car Guy Racing, definitely doesn't have that problem as he paired up with Red Bull in 2016 to produce a video of him snow drifting his Ferrari F40 up the ski slopes at Japan's Ryuoo Ski Park. And it's all posted on YouTube!

As if it wouldn't be cool enough just seeing an F40 driving around town, Kimura's Ferrari is decked out with off-road rally lights and a storage rack on top of the car as an indication for what's about to come next. Since the F40 is no rally car, the rear-drive supercar is fitted with tire studs and snow chains for added traction. The resulting footage is nothing short of amazing as the supercar icon kicks up rooster tails of snow as it blasts up the ski slope and drifts the mountain trails.

Apparently, the classic supercar had a few issues in its transition from classic supercar to snow drift car, but you can't really fault the car for succumbing to the cold weather and abuse. What didn't make the final cut in the incredible four-minute video include a dead battery and failed front struts. The tire chains ended up doing some damage to the paint, and even with the chains, the F40 still got stuck in the deep snow after veering off course.

It might be a few years old now, but Red Bull's video of this Ferrari F40 snow drifting up a ski slope in Japan is no less awesome to enjoy.