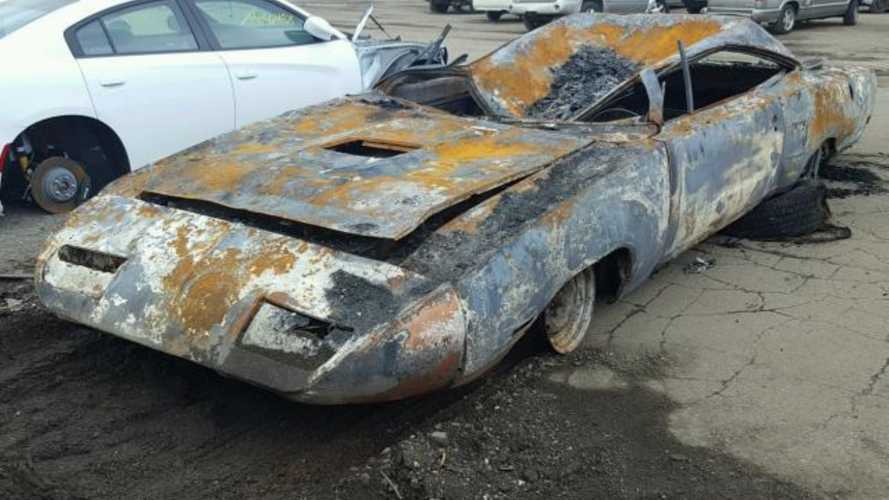 This was once a ‘hot’ Mopar, now it’s just well-done - would you pay big bucks for this burned up Superbird?

As we approach a fresh new year, and decade, this is a great time to look back on the crazy car listings we've gotten to pick apart. One of the wildest cars for sale we found in 2019 was a Superbird that's burnt (nearly) beyond recognition.

The 1970 Plymouth Road Runner Superbird is a high-grossing muscle car from the prime era of the genre - meaning, owning one today could be quite the investment. However, collectors looking to save some money up front, and don’t mind a massively involved restoration project, might want to check this unusual listing on Copart out. This particular example of the historically pricey Superbird has an estimated value of a mere $59,000, but there’s a huge catch.

How it became to be a car-becue, as well as any sort of ownership ship, is unknown. What is known is that, according to the tags and VIN number, this car war originally painted Blue Fire Metallic, and left the factory powered by the beefy 440 V8 engine with single 4bbl carburetor, and was backed by a manual 4-speed transmission. It sounds like it was pretty sweet when it was new, however, now the color is listed as “Burn” and “No” is listed as the engine type - which doesn’t seem so great. What it does come with is a manual transmission, and a set of keys.

More shocking than the charred, crushed, and rusted appearance is the starting bid of $25,000, and the valuation of $59,000, according to the listing. Either price is a little jolting since restoration of this car would essentially require replacing everything down to the floor pans, sheet metal, door tags, decals, and then there’s the matter of everything else that makes up the car that needs to be replaced. Essentially what’s happening here is, the person trying to unload the car is selling a VIN, and has extreme confidence in what someone will pay for the car.

That poses the question, could someone restore this car and come out cheaper than a near-perfect counterpart? Probably not. Will someone buy it for $25,000, or even $59,000? Stranger things have happened.

Update: Someone did buy this car, but no information is available on the purchase price.