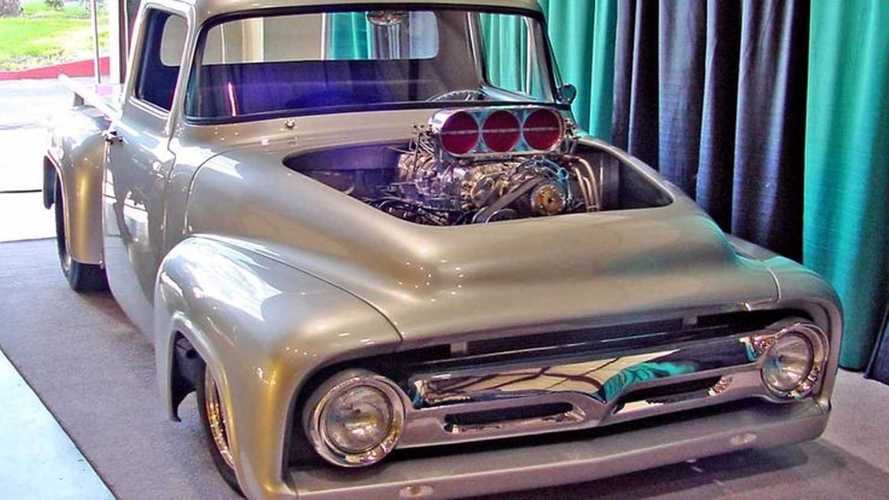 From vintage to modern, these celebrities drive some sweet pickup trucks.

The pickup truck is an American staple. First invented in 1896, the pickup was stuffed with a 2-cylinder engine with an output of 4-horsepower. In fact, it was promoted as a horseless wagon over 100 years ago. Pickup trucks have come a long way since then as they now boast incredible power, tow heavy loads, and have plenty of room in the bed to transport those necessities.

Pickup trucks are attractive and can be found on the road just as much as any car. It would only make sense that some celebrities would be driving trucks, too. Here is a list of 20 celebrities that also drive cool pickup trucks. These are in no particular order.

Channing Tatum, a top celebrity crush for women everywhere, is known for his love of fine machinery. Here he is seen with an attractive vintage Chevrolet 3100 pickup truck said to be worth about $50,000, which is likely chump change for the Magic Mike star. But, the fact that he rolls around in an old-school Chevy pickup gives him ample cool points in our book.

Known as the boss man on Duck Dynasty, Willie Robertson, also had some big trucks on the show. Recently, Willie picked up this custom Ford F-150 truck that appears to fit his personality perfectly. In fact, this new Ford should have no problem tackling the off-road to the blind for some good old duck hunting.

Lady Gaga can be seen rolling around in a first-generation Ford SVT Lightning pickup, a favorite among Ford enthusiasts. The famous singer finally received her driver's license back in 2016, and now she drives around in style and power thanks to a 5.8-liter V8 stuffed under the hood. There are plenty of people who wouldn't mind driving around a 240-horsepower Lightning as their first vehicle.

Shaquille O'Neal is one of the most recognizable and famous basketball players to ever play the game. This Ford F-650 Extreme is fitting for a man who stands an inch over 7-feet tall. Stuffed inside the engine bay of this massive truck is a highly capable 6.7-liter Powerstroke V8 engine.

Rutledge Wood, known as a host on the U.S. version of Top Gear, certainly has a large collection of vehicles. However, this yellow 2008 Toyota Tundra CrewMax is said to be his favorite vehicle among his fleet. Not only is it attractive, but it can haul around his growing family with no problems.

Said to have one of the best automobile collections in Hollywood is Dwayne Johnson, known mainly as "The Rock". Pictured here is his custom Ford F-150, nicknamed "The Bull", next to his private jet. Modifications include a sound system, 5-inch dual exhaust, and a custom black grille. It only makes sense for the action star to drive a large and highly capable American pickup truck.

Kid Rock has been around for a long time producing mega hits. Back in the day, you couldn't go anywhere without hearing "Cowboy" everywhere you went. Once married to Pamela Anderson for a small period, there's no denying that Kid Rock is rolling in the dough and can buy whatever vehicle he pleases. Pictured here is his brand new GMC Sierra with a few upgrades including a 6-inch suspension lift, fender flares, and a black grille.

There's no denying that Tim Allen is a well-known car guy. Known for his role on Home Improvement back and the movie The Santa Clause among others, Tim has been in the spotlight for years and has the funds for his own private car collection. Among his fleet is a custom 1956 Ford F100.

Darryl McDaniels, also known as "DMC" is well-known for being in the iconic rap group from the 1980s, Run DMC. Another celebrity vehicle enthusiast, McDaniels has quite the collection parked in a personal garage, but his favorite is this 2009 Ford F-150 Platinum.

Another celebrity car enthusiast is Scott Caan, known for his role in Entourage as well as the Ocean's Eleven movies. Caan also has a large collection of vehicles that includes this 1950 Ford F Series, a vintage truck that is surely valuable.

Bad boy Jesse James is well-known for many reasons. He was once married to Sandra Bullock and starred in West Coast Choppers. Jesse James is another celebrity with an extensive car collection with one favorite being this Ford Hennessey VelociRaptor 575 with 496-horsepower and 473 lb/ft of torque.

Irish actor Colin Farrell is known for roles in plenty of movies. He can be seen driving around town in a 1996 Ford Bronco, a truck that is low-key and probably not associated with a celebrity but one that would definitely catch the eye of any car enthusiast.

Famous skier, Glen Plake, has brought interest back to the winter sport. Another car nut, Plake is said to have quite a collection of vehicles. One of his favorites is this 1959 Chevrolet that he sold but regretted immediately. While sitting on an airplane, Plake was hit hard by the thoughts of his old '59 Chevy and was wishing how he still owned it. He just so happened to stumble across the same exact truck on Craigslist, so he and his wife went out right away and scooped it back up. He also drives around a Ford F-350.

Famous singer John Mayer is also a car enthusiast. He purchased this custom Earth Roamer, one of the biggest off-road vehicles on the planet used mainly for expeditions. The truck is over 26 feet high and is powered by a 6.7-liter V8 engine with an output of 300-horsepower.

Randy Couture, UFC legend, owns this stunning classic 1949 Chevrolet pickup. While many UFC fighters are all about speed and quick reflexes and likely buy cars that mimic that, Couture bought this beautiful vintage pickup truck that is more for cruising. It likely breaks a few necks along the way.

Scott Disick is mainly known for his turbulent relationship with baby mama Kourtney Kardashian on Keeping up with the Kardashians, but he is also an avid car collector. He owns a few Rolls-Royce models, a Lamborghini, an Audi R8, a few Ferraris, a Chevy Camaro, and a Bentley. But one of his favorites is this custom Ford F-150 SVT Raptor.

Host of the American Restoration TV show on the History channel, Rick Dale can restore pretty much any car or truck. His daily driver is this 1951 Ford F100, and it actually isn't completely finished yet. Having started the restoration process 15 years ago, time has been hard to come by to complete the long list of things needed to get the truck in tip-top shape.

Another petrol head as a celebrity is John Huertas. Known for his role in Generation Kill, Huertas pilots around this classic 1969 Ford F100. A vintage Ford F100 in good condition is a highly sought after vehicle among collectors.

Yoenis Céspedes is a baseball legend, being one of the best outfielders to play for the New York Mets. Also a car enthusiast, he recently showed off his custom Ford F-250 equipped with some massive wheels.

Baseball player, Mike Trout, took home the prominent title of most valuable player back in 2015. Thanks to the well-deserved award, Trout was able to choose between a sixth-generation Camaro or a Chevrolet Silverado midnight edition. As you see here, Trout chose the attractive yet stealthy Silverado with plenty of options and room.