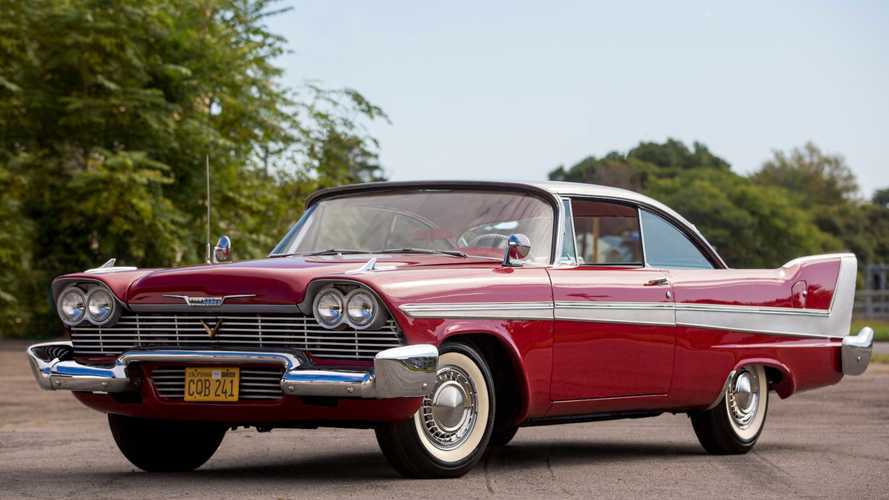 Yes, this is the real deal movie car that starred in the 1983 film "Christine" that was based off of the novel by Stephen King.

Anyone who is a fan of classic cars and Stephen King are likely familiar with this iconic movie car, a 1958 Plymouth Fury named Christine. Based off of the novel written by Stephen King, the 1983 film Christine starred this exact red and white Plymouth known for seducing 17-year-old Arnie Cunningham in the film with her sleek body lines adorned with attractive chrome trim. In the Rated R cult classic movie directed by John Carpenter, this iconic car unleashes her terrifying wrath on any individuals that interfered with his undivided attention and devotion to her. Not many of the Plymouth Fury cars used in the movie are known to survive today. This particular example was used for the close-up beauty shots throughout the film.

This real deal movie car is crossing the auction block through Mecum this coming January, but she won't be a cheap date by any means. The car is estimated to bring in anywhere between $400,000 and $500,000.

After production wrapped up on the movie, this star car was part of a promotional raffle that took place on New Years Eve during the show "Night Flight" that aired on the USA Network. About 40,000 people participated in the raffle, and the lucky winner was Scott Edminster. The car was previously part of the Ron Pratte Collection, and it made an appearance at the 35th Anniversary celebration for the movie in 2018 at the Rochester Auto Museum. Many of the cast and crew reunited for the celebration alongside the infamous Christine.

Given a comprehensive restoration, this famous Fury features a small block wedge V8 engine topped with an Offenhauser intake manifold and dual 4-barrel carburetors. Power is sent down to the wheels via a TorqueFlite push-button automatic transmission. In addition, this classic is equipped with both power steering and power brakes. Behind the doors is a red vinyl and cloth interior complete with bench seats along with that famous AM radio that was Christine's voice, red carpet, correct trim, and a 150-mph speedometer. The exterior features full-size wheel covers with Whitewall tires, and a bumper sticker slapped on the back that reads "Watch out for me, I am pure evil, I am Christine."

Before the book and movie, the '58 Plymouth Fury wasn't exactly a car guy's dream car. In fact, it was a car that was overshadowed by vehicles produced by Ford and Chevy. During an interview, Stephen King said that he chose the car “Because they're almost totally forgotten cars. They were the most mundane ‘50s car that I could remember. I didn't want a car that already had a legend attached to it like the ‘50s Thunderbird, the Ford Galaxies etc... You know how these things grow. Some of the Chevrolets, for example, were supposed to have been legendary door-suckers. On the other hand, nobody ever talked about the Plymouth products.”

Now, the 1957-1958 Plymouth Fury is a popular icon and will forever live on as Christine, the seductress with a terrifying temper. This is the only Plymouth Fury "Christine" movie car that has a paper trail, and that includes the Polar Films ownership. Even more, the car comes with photos with producer Richard Kobritz with the car along with other various cast members.

So, if you're one of the cult followers of the '80s supernatural horror flick, here's your chance to own a part of automotive movie history. Occupying Lot F156, this real deal movie car will cross the Mecum auction block in Kissimmee on Friday, January 10th, 2020.