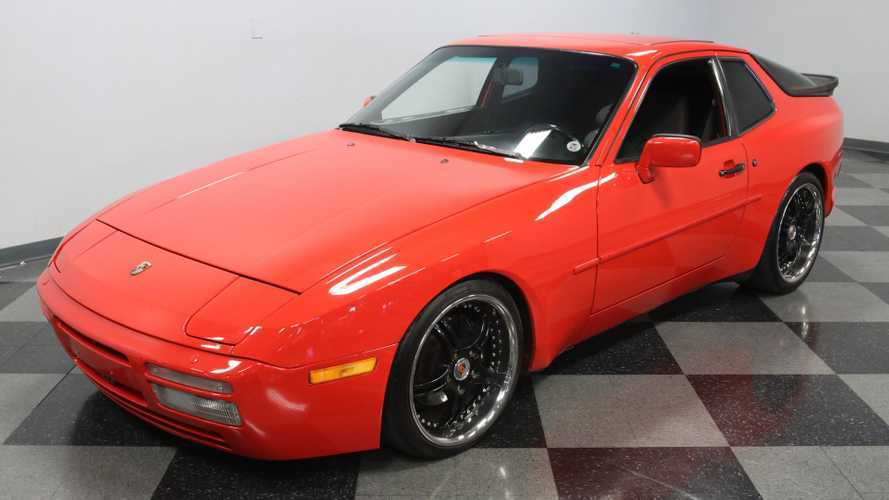 Sometimes sacrilege is a beautiful and powerful thing.

Porsche purists most likely won’t like this 1988 Porsche 944 with an LT1 V8 shoehorned into it. Even at factory spec, quite a few Porsche fans still wouldn’t like this car because they have the narrow belief the only true Porsche has a rear engine, rear-wheel drive, and air cooling. Hopefully you’re not restricted by such viewpoints, because you can truly enjoy this wondrous combination.

It’s not every day you run across a Porsche 944 with a Chevrolet Corvette heart, but that’s exactly what we have here. The Chevrolet LT1 V8 engine provides fuel-injected power, making for heart-stopping launches and strong acceleration on the street or track. You could call this a wonderful sleeper since it packs more of a performance punch than anyone would expect at first glance. After all, this car original came with a four-banger, so this is a big upgrade.

A five-speed manual transmission just adds to the fun of driving this car. A lowered stance, Continental tires, and four-wheel power disc brakes provide excellent control to counterbalance all that power.

Looks do matter, and this Porsche 944 has aged well. The Guards Red body shines up nicely and is straight. Panel gaps appear consistent and all the important trim pieces are in place and whole. There’s even the Porsche emblem on the nose, 18-inch black wheels, and zero indications of what lurks under the hood.

Some interesting and well thought-out upgrades make the interior even more epic than you might suspect. First off, 911-style seats look great and are comfortable for longer drives. Pod gauges on the driver’s A-pillar help with keeping track of critical elements like water temperature when you’re really pushing this car. Factory features still retained include air conditioning, cruise control, power windows, power steering, and a removable sunroof.

You don’t have to just admire this Porsche with a Chevy heart from afar. It’s for sale through Streetside Classics, so you can have your shot at owning this glorious car.