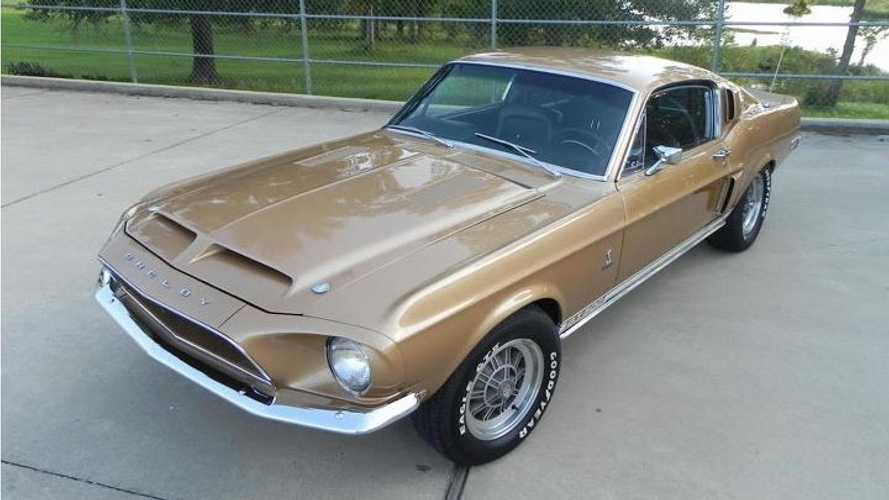 After tremendous success with their race-ready Shelby GT350, Ford Motor Company and Carroll Shelby introduced another collaborative Mustang in 1967. It was called the Shelby GT500, and it was stuffed with incredible big-block power.

This stunning Shelby is blanketed in Sunlit Gold, a color that was only available for half the production year and given to just 270 GT500 cars off the assembly line. The top stripe was deleted allowing the golden hue to be the main star. The nose and tail section were made of fiberglass along with the functional hood scoops, and four-side air scoops.

Inside the car is the same trim found in the Mustang GT along with air conditioning, power steering, and a functional rear folding seat. The car retains its original interior complete with the original shoulder harnesses.

This particular example is an original car that has been restored with the correct original power train. Powering this vintage Shelby GT500 is the correct 428cui Cobra Jet V8 engine mated to a 4-speed manual transmission. Topped with twin Holley four-barrel carburetors, the GT500 generated 360-horsepower.

This outstanding example has been stored in climate-controlled storage and shows in fantastic shape. While the exact number on the odometer is not listed, the car is said to have low mileage.

For the 1968 model year, only 1,044 Shelby GT500 cars were produced. However, the Shelby GT500 outsold its GT350 brethren. This same production year, production of the Shelby cars were moved from Carroll's headquarters in California to Michigan. Here, the car would be built next to the other Mustang models. Shelby's hand in things became less and less, and soon there was a divorce between the two companies as Ford marched on with the Shelby name.

Whether you are looking to sell a classic, sports, muscle, or one-of-a-kind collector automobile Russo and Steele’s consignment process has been streamlined specifically for your ease. Once you have made the decision to sell your classic car, a Russo and Steele Consignment Specialist will take over from there and work with you every step of the way. You start the consignment process by simply filling out the pre-consignment form online, so a specialist can contact you and has some background on your specific car.

If this '68 Shelby GT500 would make the perfect candidate for those sunny weekend cruises, look no further than this classic golden child.