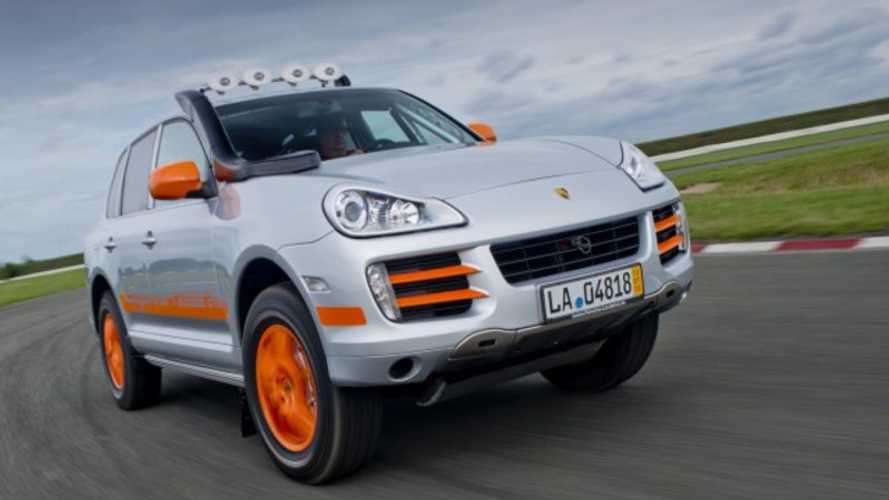 Only 26 Cayenne S Transsyberia actual SUVs were built and entered into the 0,000-kilometer Transsyberia rally where they secured the top 6 spots.

Back in 2007, a pair of customer-modified Porsche Cayennes were entered to compete in the 10,000-kilometer (roughly 4,411-mile) Transsyberia Rally. After proving victorious at the event and taking home the top spot, the German automaker built 26 of the Cayenne S Transsyberia SUVs at the German automaker's Weissach facility. All of them were entered into the same rally the following year and secured the top 6 podium spots. A silver and orange rally-dominating Cayenne once piloted by Team Iberica during the Transsyberia rally is now up for grabs through RMD.

This particular '07 Cayenne finished in the top five both times it competed in the rally. The sale of the rare SUV comes with a Porsche Certificate of Originality, a special Transsyberia book, and Spanish Technical Inspection Document.

Mainly a big marketing campaign by Porsche, the Cayenne retained many of its stock features such as the Porsche Active Suspension Management (PASM) and Porsche Traction Management (PTM). The optional off-road mode offered by the Porsche Dynamic Chassis Control (PDDC) is capable of lifting the truck up to 12 inches thanks to the air suspension, and can take on bodies of water to 30-inches deep. The optional Off-Road Technology Package included a transverse lock. A snorkel mounted to the roof prevents any water from flooding the intake manifold inside the engine bay.

Porsche combined elements from the Cayenne S and Cayenne GTS to create a rally-conquering SUV. Powered by a 4.8-liter V8 engine that generates 385-horsepower, it comes backed by a 6-speed Tiptronic S transmission and given a 4.11 drive ratio. After placing high in the rally, Porsche released a commemorative Transsyberia edition, but it is not as rare as the actual SUVs that competed in the actual event.

The rally Porsche SUV is also fully caged on the inside and given A and B pillars that have been reinforced. The underbody features extra protection, and a handbrake sits in place of the foot-operated parking brake. Even more modifications include the meaty off-road rubber, winch mounted on the front, a lightweight exhaust, and additional lighting mounted to the roof. The electrical system was reworked giving the passenger control over the navigation system. The rear seat was replaced by two reserve fuel tanks, two spare wheels wrapped with new rubber, and shovels. Even more, this rally-conquering Porsche features a grippy Alcantara-wrapped steering wheel, bright orange dashboard trim, and diamond-plated steel installed along the floor.

Only 11,579 miles read on the odometer, which means this bad boy conquered the road less traveled a few times and isn't just parked in the garage. So, if you've been good, maybe Santa will drop off this Cayenne S Transsyberia in your driveway. The listing price is $216,821 to own a piece of rare Porsche rally history.