Which Toyota FJ40 Would You Pick? 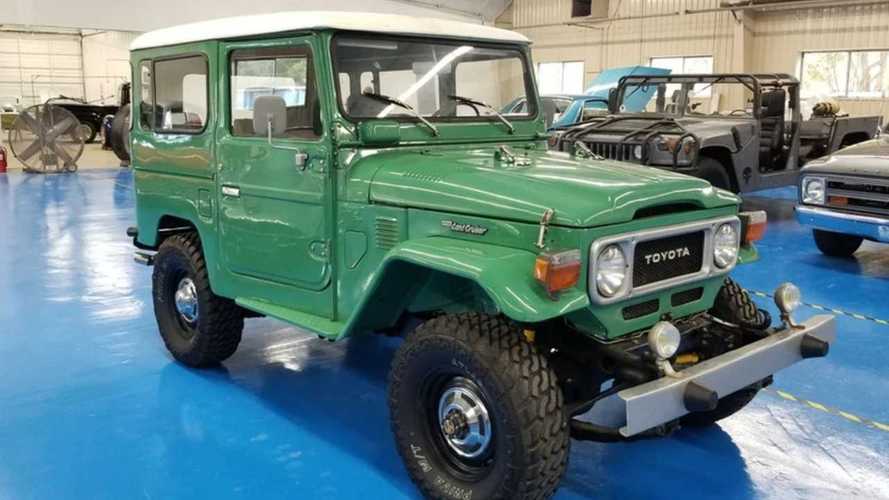 The Toyota Land Cruiser is a beloved off-road vehicle even today. However, the most sought-after version, the FJ40, has become a legitimate collector car. They’re rugged, tough, and in factory spec form quite Spartan. At the same time, these SUVs are becoming harder to find. That’s why finding three different Toyota FJ40s which are headed to the auction block through The Republic Auction Co. is something to really stand up and notice. One is a 1980 Toyota FJ40, the second is a 1975 Toyota FJ40, and the third is a 1981 Toyota FJ40.

Which one would you pick? If you go to the auction, which is next Friday and Saturday, November 22 and 23, you could bid on all three as well as some other fantastic vehicles. There’s really no wrong answer about which of these Toyotas you would be most interested in, since each one is legitimately compelling in a slightly different way.

Green is also an appropriately color for a Land Cruiser, which is what the 1980 model wears. It has a white hardtop and glass all around, keeping you a little more sheltered from the elements for great year-round adventuring. A rebuilt F2 4.2-liter inline-six engine and a four-speed manual transmission keep things fun. This rig went through a full restoration as well.

As for the 1975 Toyota FJ40, it has a bright yellow exterior and the white hardtop roof, plus the same powertrain setup as the 1980. A restoration done in 2009 means it’s still looking great, plus it comes with power brakes.

For those who want to feel the wind through their hair all the time, the 1981 Toyota FJ40 is the best option. This Rustic Green rig has a removable soft top and zero glass past the front doors, allowing you to really feel a part of nature. Using the same powertrain as the other two, it features a ground-up rotisserie restoration which includes a powder coated chassis and a new interior.

No matter which of these Toyota Land Cruisers you were to pick, you would be able to enjoy a highly capable classic. FJ40s are continuing to increase in value since Toyota isn’t making them anymore and hasn’t for a few decades, plus unfortunately some have been destroyed in accidents. That makes investing in any of these vehicles a wise financial move that’s also a lot of fun.

There will be over 400 cars at the auction next weekend, which is being held in Dallas, Texas. If you have questions about the upcoming auction or these vehicles, contact The Republic Auction Co. directly.

Tear Up The Strip With This 1926 Ford Roadster
Source: Motorious
++Share