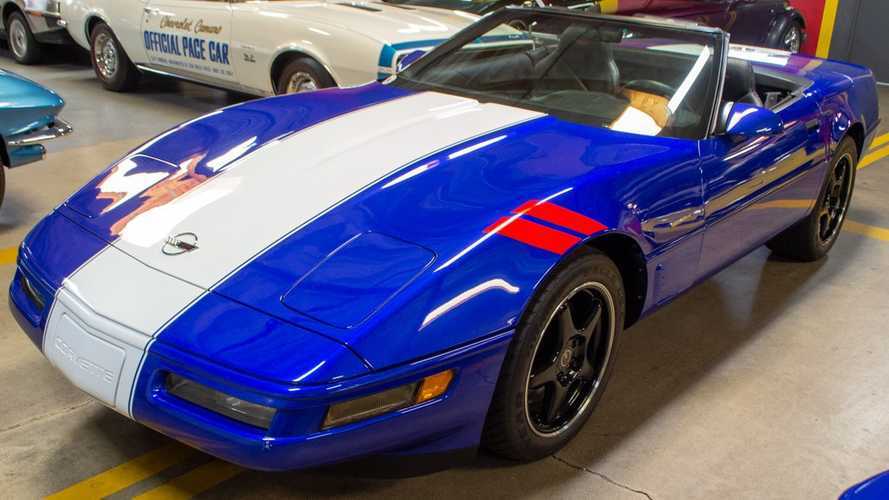 Here's your chance to buy one of the rarest Corvette models ever built.

The C4 Corvette is like the Rodney Dangerfield of 'Vettes in that it usually gets no respect, but Chevy definitely sent this generation out in style with the return of the Grand Sport model. While only five of the original Corvette Grand Sport models were ever made, the 1996 Chevrolet Corvette Grand Sport was still extremely limited in production with just 1,000 units made that year, and of the 190 convertibles included in that number, Corvette Mike is selling one of the finest examples you're likely to find.

All of the C4 Grand Sport Corvettes were identical with Admiral Blue paint, white racing stripes, a pair of red fender strips on the driver's side and black wheels. The 190 convertibles produced all had white soft tops, as well. The Grand Sports lived up to their racing heritage by offering the Corvette's optional 330-horsepower LT4 V8 as standard equipment mated to a six-speed manual gearbox.

Collectors knew exactly what these Grand Sports represented in 1996, so pretty much all of them were tucked away and preserved in private collections. Such is the case with this particular Grand Sport Convertible, which is still in showroom-new condition. This Grand Sport have even achieved what is apparently the Triple Crown for Corvettes having been awarded an N.C.R.S. Top Flight, Bloomington Gold and Chevy Vettefest Gold Spinner. Best of all, this show-winning 'Vette has a little over 10,000 miles on the odometer meaning that it has been occasionally enjoyed over the years, too.

The convertible C4 Grand Sports are among the rarest Corvettes ever built, and this gorgeous example is just one of the many Corvettes (and non-Corvettes) currently up for sale through Corvette Mike. This stunning, low-mileage Grand Sport is priced at $39,900, so be sure to contact Corvette Mike for more information and availability because this rare 'Vette won't last long.

Own This Rare-Colored 2011 Chevy Corvette ZR1 With 838 Miles
Source: Motorious
++