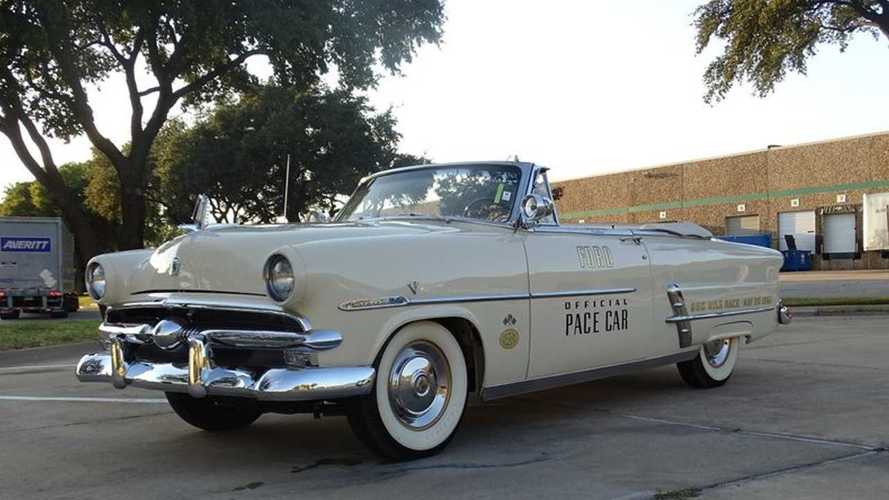 When's the last time you saw a pace car with a continental tire kit?

As cool as it is to see high-powered sports cars pacing the legendary Indianapolis 500, there is always something a little extra cooler about seeing vintage cars painted up in the Indy 500 livery. That's the case with the extremely rare 1953 Ford Crestline Sunliner pace car, which sold at this weekend's GAA Classic Cars for $54,000. Considering the new owner gets a unique car that is a three-time award-winning classic pace car, that sounds like a good deal to us!

For duty pacing the 37th Indianapolis 500, the 1953 Ford Crestline Sunliner was painted in a Sungate Ivory and Gold exterior color, which is exclusive to the pace car, and a white soft top. The interior matches the exterior with white and gold leather seats and a gold accent painted across the dash. Under the hood is a 239 CID V8 and a two-speed automatic transmission. Perhaps the most interesting part of this Crestline Sunliner is that it has a continental tire kit, which is an unexpected element to a pace car.

As proof of how flawless this Crestline is, it has won three prestigious awards. The Antique Automobile Club of America awarded it the AACA National Senior show winner back in 2008 and AACA Grand National Senior show winner two years later. The Early Ford V8 Club of America gave this pace car the Dearborn Award. It's not very often you can buy a show-winning car, but this is definitely a thoroughbred.

This beautiful, award-winning 1953 Ford Crestline Sunliner was one of more than 600 cars to cross the auction block from November 7-9, and its sale price reflects the rarity and overall quality of this stunning show car.