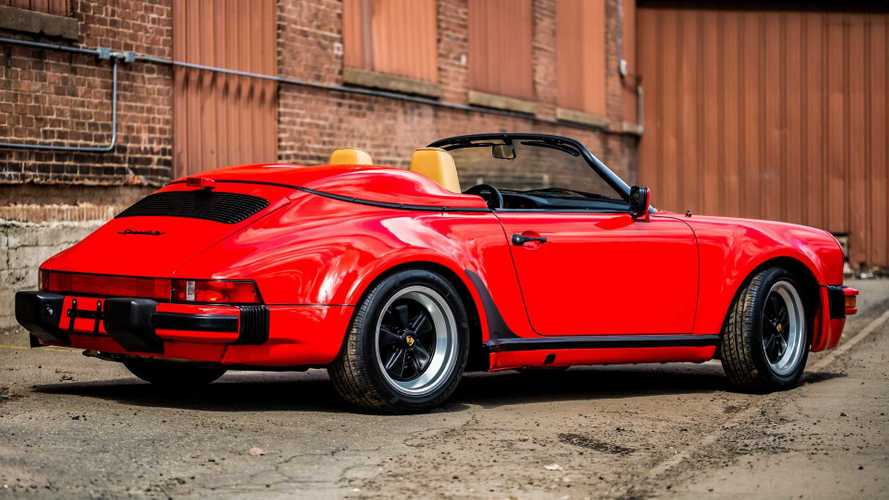 This all-original two-owner car is up for grabs.

There’s something immediately special about this 1989 Porsche Speedster being sold by GT Motor Cars. After all, you don’t see too many 911s with such a roofline. Created to celebrate the original Porsche 356 Speedster, which was made in 1954, this one marked the 25th anniversary of the creation of a German legend. Highly sought after and rare, this car is now on the open market.

That raked windshield and the iconic twin bumps behind this two-seater is accentuated greatly by the lustrous red paint, which is completely original. That might be amazing, but so is the fact all the exterior black trim not only has bee on the car since day one, but looks almost velvety and not the least bit faded. Those factory wheels also lack signs of wear or damage.

Open the engine compartment in the rear and you’ll find everything is clean and in original condition. That means enjoying the flat-six just as it was intended by Porsche. Each service record dating back to 1991 is included with this vehicle, so you know it’s been cared for properly. All the tools in their roll and books from the factory, plus the original window sticker are included. The seller is even including a Porsche Certificate of Authenticity.

Only about 2,100 Porsche 911 Speedsters were made in 1989, with some not surviving. Since they were the first 911 Speedster ever created, collectors flock to any example in excellent condition, like this one. That fact alone makes this an ideal addition to the garage of discerning Porsche enthusiasts or collectors, as it no doubt will continue to climb in value.

Of course, if you’re interested in purchasing this car you’ll need to contact GT Motor Cars for details. You can also check out the other vehicles they have for sale, which is quite the selection. The company also offers a number of services like professional detailing, storage, and restoration.