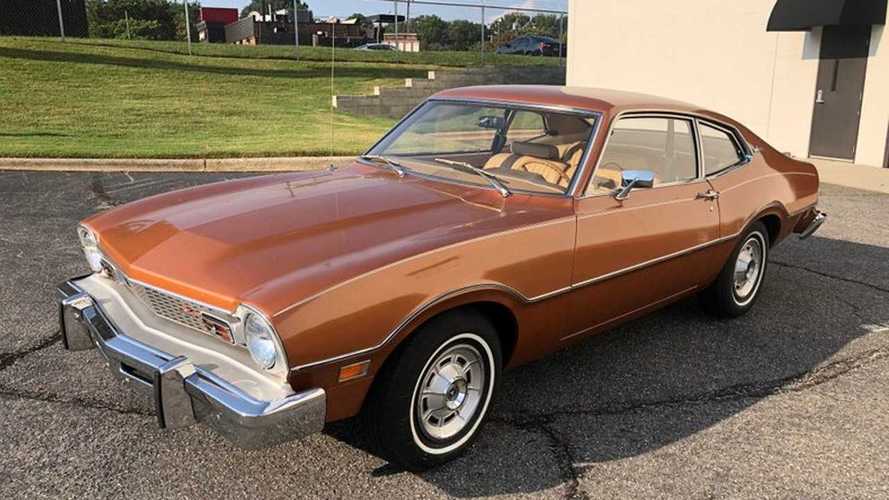 This lowly, brown Maverick was auctioned off four times for a great cause.

The first day of most car auctions is generally reserved for more affordable cars as a way to build excitement for the upcoming lots, but GAA Classic Cars provided plenty of enthusiasm on day one. Of all the cool cars to cross the auction block today, it was this 1974 Ford Maverick that really got the crowd amped up. This Maverick was donated to help raise money for the University of Iowa's Institute for Vision Research, and that mission was accomplished as four bidders helped raise $39,500 for the charity.

As the Maverick rolled onto the auction block, it was introduced by Dean Green, president and founder of the GAA Classic Car auction, who announced that all of the proceeds of this sale would go straight to the University of Iowa to provide a life-changing procedure for sufferers of inherited eye disease. He said the IVR is close to FDA approval for its procedure, and then the crowd helped show just how generous classic car enthusiasts can be. The car's bid quickly jumped to $10,000 before hammering at that price, but then the bidder redonated the car to be auctioned off again. In fact, that happened two more times for the same $10,000 price before it was finally auctioned off to its winning owner for $9,500. When all was said and done, this Maverick raised $39,500 in tax-deductable bids!

As for the car itself, this 1974 Ford Maverick is about as clean as you'll find one of these cars. The odometer shows what is said to be 25,000 original miles, and the overall condition of this Maverick would seem to back that up. The brown-on-brown coupe with a 250 CID inline-six under the hood might be just another Malaise Era classic, but this '74 Maverick raised a lot of money for a great cause.

This charitable Maverick sold on just the first day of the GAA Classic Cars auction in Greensboro, North Carolina, and if you missed any of the action, there are still two more days left for this event. That means you still have time to get registered to bid and have a shot at buying your next dream car.

Coolest Cars For Sale On Motorious This Week