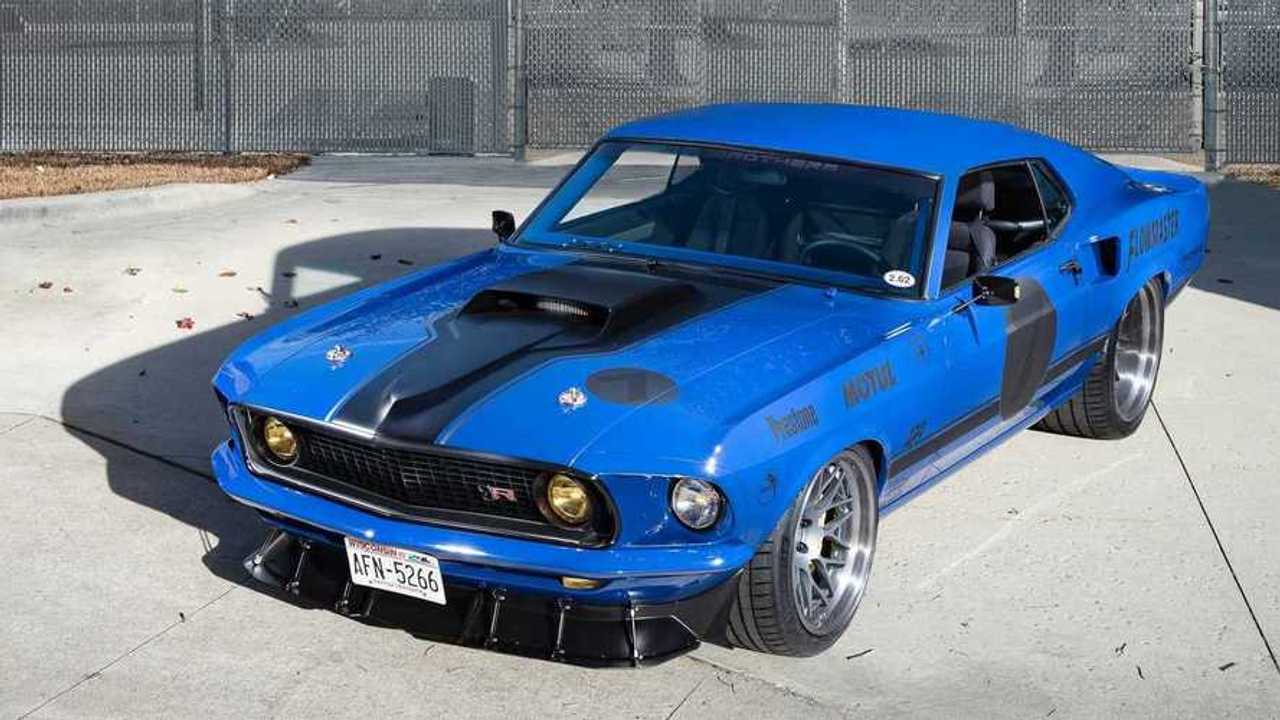 The Wisconsin shop brings the heat for SEMA 2019.

Aggression on wheels: that’s an accurate description of UNKL, a 1969 Ford Mustang Mach 1 built to lofty specs by Ringbrothers. Inspiration for the name comes from the Ringbrothers owner’s uncle, who influenced his love of cars. Amazingly, Ringbrothers has worked on quite a few Ford Mustangs, including some most beloved by enthusiasts, but this is its first Mach 1.

As you can see, Ringbrothers modified the body significantly. Some of the panels are reshaped steel, but others are new carbon fiber, adding lightness to the build. The body is an inch wider on each side, making the stance a little more athletic and modern.

Of course, the big highlight of UNKL is the 520ci Jon Kaase Boss V8 engine which has been tuned to whip out a maximum 700-horsepower. Mated up to it is a Bowler six-speed Tremec transmission. To transfer that twisty force to the rear wheels, Ringbrothers used a QA1 carbon-fiber driveshaft. The appropriately angry tone is set by a custom stainless-steel Flowmaster exhaust system.

Even sitting still, this ’69 Mach 1 looks impressive. A lot of that is due to the custom BASF paint Big Boss Blue, which adds a bit of a mysterious aura while also looking appropriately vintage. On top of that is a livery inspired by motorsports. Bespoke forged HRE Wheels and Michelin Pilot Sport 4S tires ensure this Ford is a true standout.

With so much power in a car comes the need to control it. Driver skill is a factor, but a Detroit Speed Engineering Aluma-Frame front suspension, adjustable RideTech coilovers, tubular suspension arms, a cast-aluminum cradle, and a custom-tuned steering rack help considerably. Out back is a Detroit Speed QUADRALink suspension with RideTech shocks. To stiffen things up further, Detroit Speed front and rear sway bars were also used. Baer supplied 6S Extreme brake calipers for increased stopping performance, another key to keeping this beast in check.

The customizations on this Ford Mustang Mach 1 weren’t restricted to the exterior and under the hood. Upholstery Unlimited created a custom interior inspired by racing. It includes Recaro seats, Classic Instruments gauges, Momo steering wheel, Ididit steering column, Vintage Air Gen IV Magnum evap kit, Kicker sound system, and plenty of Ringbrothers custom billet parts. For example, red switches on the dash control the ignition, lights, wipers, and more. It all combines to make for a more exciting experience for the driver and passenger.

If you’re attending the 2019 SEMA Show in Las Vegas and want to see this build in person, UNKL will be located at the Flowmaster booth.