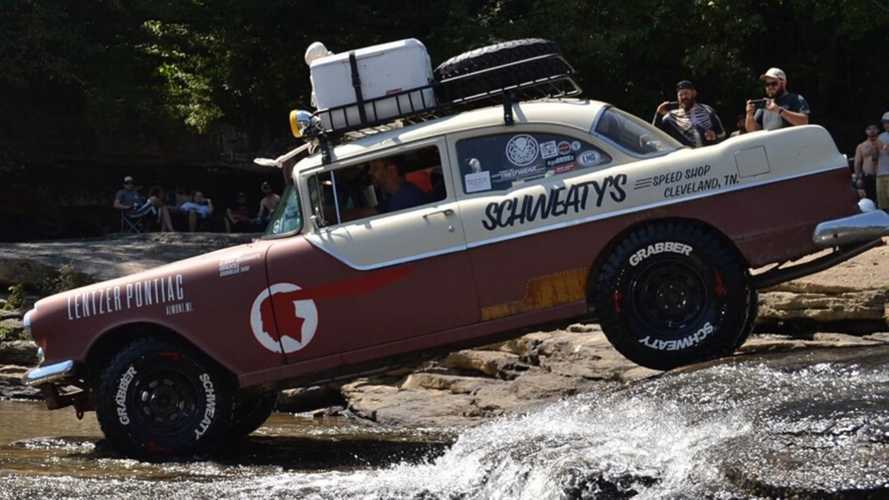 This kind of Frankenstein work should be more common.

Some people’s idea of a restomod is to drop an LS1 in a classic and upgrade the driveline, maybe drop in a newer sound system and seats, then call it good. Schweaty’s Speed Shop is by all accounts not average or normal, and that’s most definitely a good thing. The first piece of evidence is the fact it would look at a 1955 Pontiac Chieftain and think of off-roading in any context.

Seeing stills of this Chieftain climbing over rocks and wading into creeks only makes us want to see video of it in action, or better yet drive it ourselves. The roof basket, KC lights, and those big tires with aggressive lugs are just so much eye candy. Just the unique nature of the build makes this Pontiac more compelling than Jeep Wranglers and Land Rover Defenders, which likely are more capable but lack that ironic twist.

Taking cars you normally associate with strictly pavement duty and turning them into off-road monsters is a growing trend in the automotive world. We’ve seen all kinds of crazy examples lately, although this trend is still largely dominated by the Porsche 911 Safari builds, something the German automaker started a few decades ago.

Schweaty’s Speed Shop describes itself as “the no kill auto shelter taking junk cars and making them fun again.” It’s certainly not a unique notion, taking cars others have decided are complete trash and turning them into something awesome, even though Schweaty’s way of describing what it does is creative. Apparently, this ’55 Pontiac Chieftain hadn’t been running in quite some time when the shop got its hands on it, so the thing was literally brought back to life. There really need to be more shops and individuals like this, because while it might not be practical or even possible to faithfully restore classic cars, turning them into something people can appreciate is truly awesome.

According to Schweaty’s Speed Shop’s Facebook page, it’s based somewhere in Cleveland, Ohio. We have questions, many of them, if anyone who knows the owners is reading.