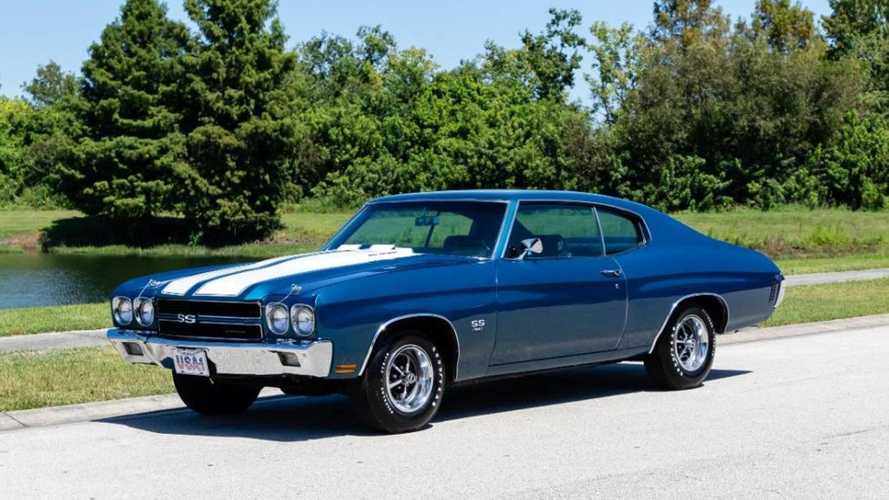 This highly desirable Chevelle SS 396 L78 has 375-horsepower on tap.

Past and Present Motor Cars is offering a prime opportunity to take home this gorgeous and mostly original 1970 Chevrolet Chevelle SS 396 L78. This vintage muscle car started life in September of 1969 when it rolled off the assembly line at GM's Baltimore Assembly Plant, and it was filled to the brim with rare and unique options that can be found on the original build sheet that comes with the sale of this stunning example.

Repainted just once over the course of five decades, this stunning Chevelle SS was resprayed in its factory hue of Fathom Blue. Even more, hours of prep were dedicated to making the body of this classic laser-straight before the deep, shiny original blue was laid on. Sitting on all four corners is a set of YA wheels that come wrapped with Goodyear Polyglas rubber. Only 99,762 original miles grace the clock which is low considering age of the car but enough to know that this classic beaut has enjoyed the open road from time to time.

As mentioned above, powering this vintage Chevelle is the highly desirable L78 396cui V8 engine that still retains the original specifications, although there is no VIN on deck here. Sending power to the rear wheels is a numbers-matching M21 four-speed transmission. A functional cowl induction hood protects the engine bay but feeds cool air into the engine for utmost performance. In fact, only 2,144 Chevelles were produced with the potent L78 motor that generates a healthy 375-horsepower. This makes the Chevelle 396 L78 even more rare compared to 4,475 examples that were stuffed with the LS6.This particular example was also equipped with the rare 4.10 posi rear end, and it still has the factory smog system. The drivetrain and suspension have all been rebuilt, and a heavy-duty battery keeps this powerful Chevelle firing right up every time.

Behind the doors of this old-school Chevelle SS is a black interior complete with bucket seats. In addition, it features a gauge package with a 6,500-rpm redline tachometer, AM/FM stereo, and auxiliary lighting for the ash tray, glove compartment, luggage compartment, mirror, map light, as well as under the hood.

If this is the potent Chevelle you've been dreaming of, make that dream a reality by contacting Past and Present Motor Cars today. This vintage Chevelle SS is listed at $68,500, but feel free to make an offer. Who wouldn't want to wake up to this beauty in their garage everyday?

Get Foxy In This 1988 Ford Mustang GT Convertible