Keep It Classy With This Very Original 1973 Jaguar E-Type 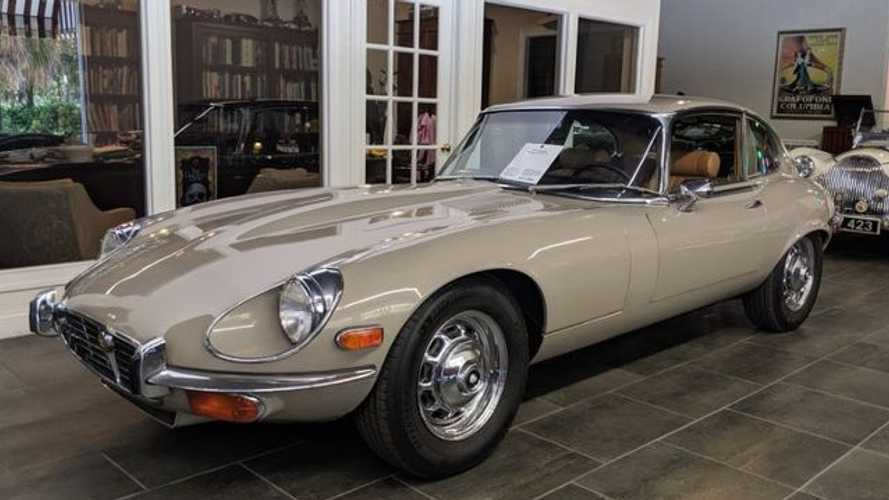 Enzo Ferrari called it "the most beautiful car ever made" when the Jaguar E-Type first debuted in 1961.

A classic car that perfectly combines luxury and power, the Jaguar E-Type certainly left an impression on Enzo Ferrari as he called it "the most beautiful car ever made" when it made its big debut in 1961. Produced until 1975 by the British automaker, the Jaguar E-Type has made multiple "top" lists in magazines and made big screen appearances in the movie Austin Powers and television show Mad Men. Carlisle Auctions is pleased to offer the opportunity to take home this elegant and very original 1973 Jaguar E-Type. The car will cross the auction stage on the weekend of November 8th and 9th, and the good news is that you can bid online.

Sporting a rare color combination, this vintage Jaguar has a shiny Gold exterior and a beige leather interior. On the outside, chrome wheels complete the car's classy exterior, and air conditioning keeps everyone nice and comfortable inside the cabin. A one-of-a-kind fully loaded sports car, this beaut is sure to demand attention no matter where it goes whether it is participating in the local car show or simply cruising around town.

Powering this beaut is a large 5.3-liter V12 engine topped with four Zenith carburetors and backed by an automatic transmission. Originally developed for the 24 Hours of Le Mans race, the V12 engine was introduced in 1971 and was rated at 272-horsepower with even more torque, but that number was reduced in later model cars. Other highlights include disc brakes, rack-and-pinion steering, and independent suspension on both the front and rear.

Gallery: Keep It Classy In This Very Original 1973 Jaguar E-Type

If this classy vintage Jaguar tops your dream car list, go ahead and turn that dream into a reality. As mentioned above, this classic gem will cross the auction stage on the weekend of November 8-9, 2019, so mark your calendars. Don't miss out on this opportunity to take home this fantastic touring car. You can register to bid here.