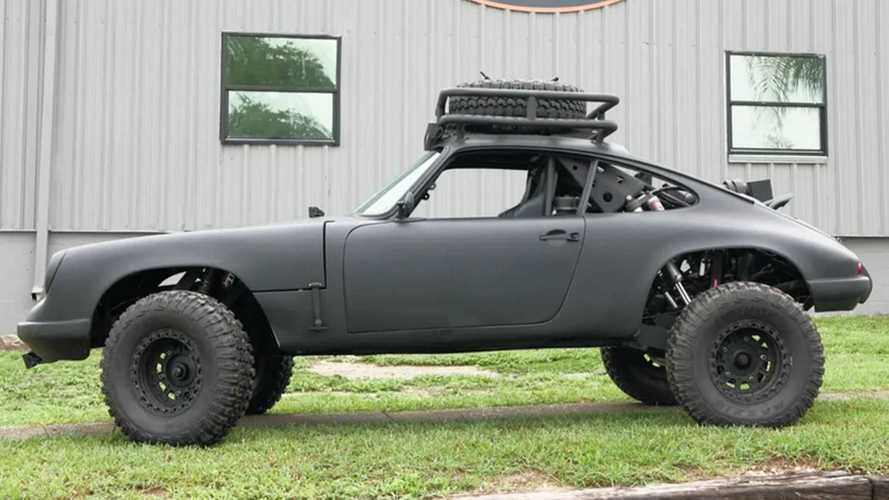 While your initial reaction to the thought of chopping up a classic 1969 Porsche 911 might be horror or disgust, if the end product is this 1969 Porsche 911 Baja it’s probably more like wonder and glee. Seeing a 911 modified to go fast off the road is always a wonderful thing, and this one from Smash Customs looks especially capable.

Right up front you should know this 911 Baja was built by none other than Micheal Lightbourn, who has a knack for hunting down and transforming classic cars. We’re not sure what the history of this Porsche is, but Lightbourn had a vision and set to work using the all-steel original body, mounting it to a tubular steel Baja racing chassis. From there he dropped a 2.3-liter Volkswagen flat-four engine in the rear and included four open exhaust exiting above the engine bay, giving this car an interesting flavor. A four-speed manual transmission makes this the ultimate driving machine.

That matte black exterior comes from the Air Ford surplus department and is the same finish used on the Stealth Bomber, which is just so very appropriate. A coating of U-POL Raptor spray-on lining for the chassis and underside of the car keeps rocks and other debris from doing too much damage as you’re ripping through the desert at breakneck speeds.

You’ll note the headlights are modern LED units, while Bully Dog LED light bars and other auxiliary lights improve visibility further. The rear and side window glass has been deleted, helping with curb weight plus improving safety and airflow.

Included on that Baja chassis is a full roll cage as well as independent suspension for the front and rear. Single Exit shock absorbers on both front wheels and twin Exit shocks for both rear wheels, plus the wheels being pushed clear of the body allows for unrestricted articulation. Also included are five three-piece OMF performance wheels and Maxxis Bighorn off-road tires wrapped around them, with a spare mounted to the roof.

The interior is just as exotic with twin racing bucket seats, a flat-bottom steering wheel, AutoMeter gauges, side intrusion bars, and more. Lightbourn even included a full Arc audio system, thanks to Arc Audio funding the project so it would be used as the company’s 2017 SEMA Show car.

If you’re interested in contacting Smash Customs to arrange for purchasing this car, just know in advance it’s not street legal. However, you can enter it into desert races or just take it to your favorite outdoor recreation area for plenty of fun.

Also, check out the other cars Smash Customs has available.

Be The Ultimate Dale Earnhardt Fan In This 1988 Chevrolet Blazer