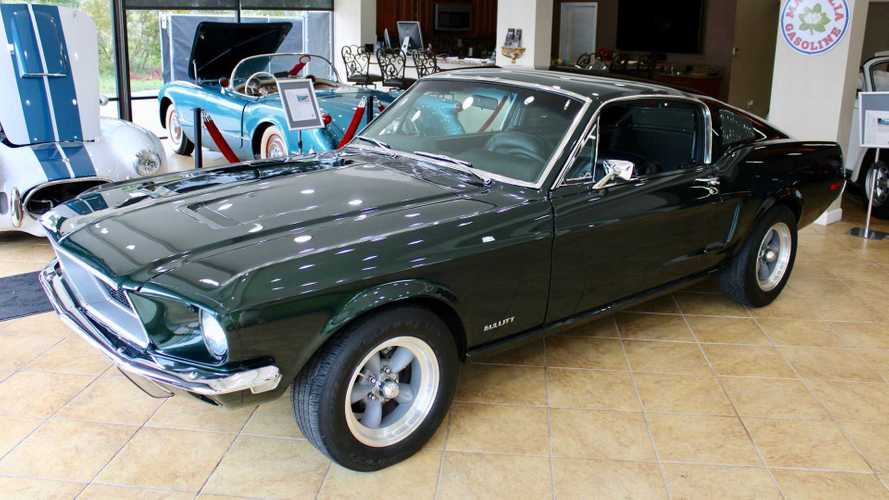 Fully restored and in much better condition than the original.

The original 1968 Ford Mustang movie car from Bullitt will go up for auction through Mecum in January, but if you're not looking to drop that much money on an unrestored artifact, then check this car out. For enthusiasts who want a Bullitt Mustang that they can actually drive and enjoy, this 1968 Ford Mustang Bullitt Replica being sold by Classic Cars of Sarasota is about as good as you're going to get.

From the outside, this car nailed the looks of Steve McQueen's hero car starting with a Mustang 2+2 fastback painted in Dark Highland Green with five-spoke American Racing wheels and all the factory badging removed. The listing says that this car has had a "Bullitt package" professionally installed, which appears to be limited to floor mats and some chrome exterior "Bullitt" logos. The coolest part of this replica is that it even comes with a California black license plate with the same "JJZ109" plate number from the movie car!

Even under the hood, this Mustang packs the same "S" code 390 CID V8 that the Bullitt hero car used, but instead of a four-speed manual, this restored replica uses an automatic transmission. The lack of a cue ball shifter might be the biggest omission from this Mustang compared to the original movie car, but it does come with full-length center console for a sportier interior. Despite these minor inconsistencies, this car's interior is still almost identical to the original Bullitt Mustang including the wood grain interior and the three-spoke Cobra-badged steering wheel.

Classic Cars of Sarasota hasn't revealed a price for this high-quality replica, but you can click HERE to make an offer.

Live Out Your Bullitt Dreams With This Charger R/T