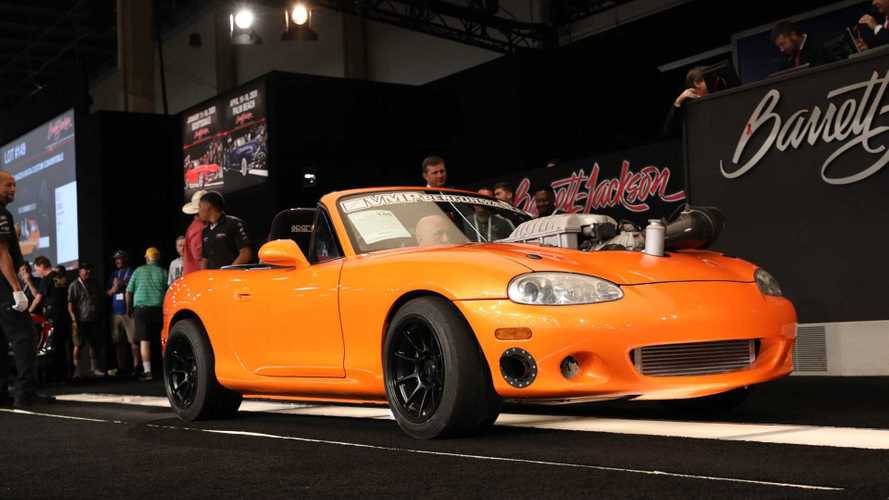 A lot of risky wagers are made in Las Vegas every day, but dropping $36,300 on a 1999 Mazda Miata with a Dodge Challenger Hellcat drivetrain is certainly not one of them. That was the winning bid for this menacing Miata, nicknamed the Hell Kitty, during the opening day of Barrett-Jackson Las Vegas yesterday.

The project started with a wrecked 2017 Dodge Challenger SRT Hellcat from Copart, which was then used as a donor vehicle for its 707-horsepower, 6.2-liter supercharged Hemi V8 and six-speed manual transmission. Cramming that massive engine into the engine compartment of a Miata was a challenge in itself, and the entire build was documented in a series of videos on YouTube, which you can see here.

Unlike some sleepers, there's no hiding the fact that this a monster Miata. For starters, only about three-quarters of the Hellcat engine is actually covered by the hood, and then you have the eye-catching Tangelo paint job. To handle all that power, the Miata received a Ford 8.8-inch rear axle with 3.07 gears with a welded final drive. For safety, it has been equipped with racing seats and a roll cage, but just in case you were worried about driving this Miata in bad weather, it even comes with a new hardtop!

After it was completed, this Miata received nationwide attention and was even featured by Gas Monkey Garage, and there are plenty of videos on the builder's YouTube page of this car destroying tires.

This custom Miata was one of the craziest vehicles to cross the Barrett-Jackson auction block yesterday, but there are still two more days to go as this event wraps up October 5. Hopefully, whoever buys this Miata will be more cognizant of the Hellcat's raw power than Kevin Hart was.

Be A Sleeper Jeeper In This LS-Swapped Jeep Wrangler LJ