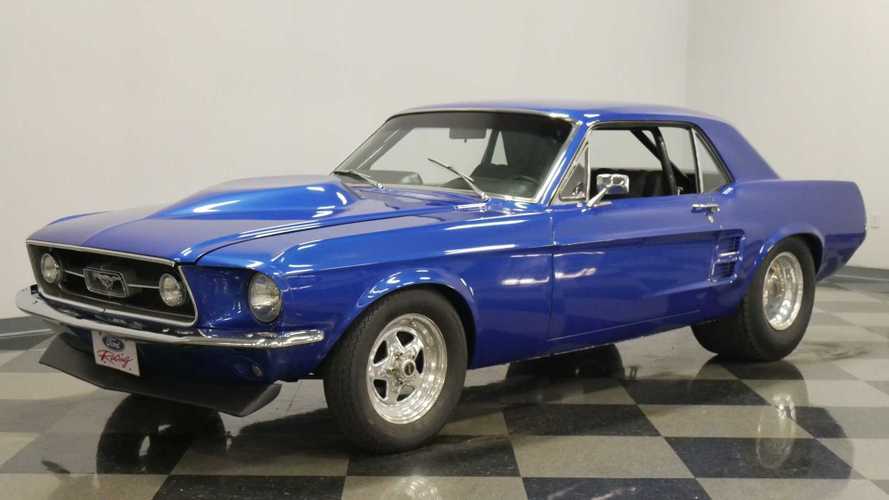 This car has the looks of a first-gen Mustang with the soul of a late-model 'Stang.

Pro Street and restomod conversions are pretty common these days, but this 1967 Ford Mustang is essentially a modern car hiding out underneath a classic body. Streetside Classics of Nashville is selling this Pro Street Mustang that drives as mean as it looks.

From the outside, this '67 Mustang is a mean-looking car with its Thunerbolt-style hood and drag car-like stance. The front tires are just seven inches wide, while the rear tires are almost twice the width measuring 14 inches; in true drag racer form, these tires are mounted on Weld wheels, and those rear tires are tubbed and tucked under the car beautifully. The car's look is finished in a brilliant dark blue hue with a big chin spoiler and GT-style fog lights add even more to the sporty appearance.

Under the skin, though, this Mustang is very interesting. As cool as the first-gen Mustang powertrain options were, this car uses the drivetrain from a 2001 Ford Mustang GT including the 4.6-liter V8 and four-speed automatic transmission. This modern fuel-injected engine sends power to those fat drag radials through a heavy-duty driveshaft and rear end, while the X-pipe dual exhaust ensures you won't go unnoticed while driving this car around.

Inside, the Mustang's factory dash was retained but the rest of the interior incorporates late-model elements like the electronic gauge cluster, OBD-II connector, HVAC system and bucket seats from a Kia Soul. Although it features a six-point roll cage that is set up for racing harnesses, this car only uses lap belts for the front passengers; the fat, tubbed wheel openings replaced the rear seat.

Streetside Classics has this 1967 Ford Mustang Pro Street car listed for $27,995, but you can click HERE to make an offer on this car.

First Mustang Built Reunites With Salesman Who Mistakenly Sold It