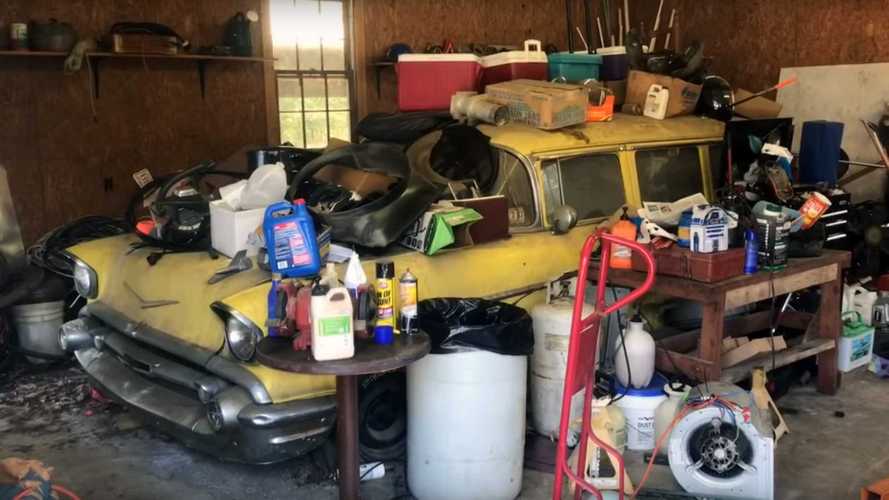 What good is a barn find if it isn't for sale?

For some car enthusiasts, stumbling upon a genuine barn find is about as likely as alien hunters gaining access to Area 51. Even worse, when some barn finds are discovered, the owner is usually adamant against selling. Fortunately, neither is the case with this 1957 Chevrolet Bel Air station wagon that's been collecting clutter since the 1980s.

Patrick Glenn Nichols, who has a video blog called Musclecar Barn Finds, was driving through rural North Carolina when he says he stumbled upon the Bel Air, which was last registered in 1989. As expected, the car has definitely deteriorated over the years, but from what we can see, the car has survived with only a bit of body rust and four flat tires.

The owner didn't allow Nichols to open the car or do too much digging, but he was able to do as good of a walk around as possible considering the amount of clutter on and around the car. He didn't say how much the seller was wanting to get for the barn-find Bel Air, although this would certainly make for a killer classic Chevy project.

There's no word as to the running condition of the car – or if there's even an engine under the hood at all – but it still looks like it's a mostly complete car. Judging from the alleged repaint and some missing trim pieces (on the right front fender), this seems like a project that may have gotten away from its owner as is the case with a lot of barn finds like this.

If you're interested in this barn find, watch the video and leave a comment. Apparently, Nichols has the owner's contact information and he's willing to pass it along. Way to pay it forward!