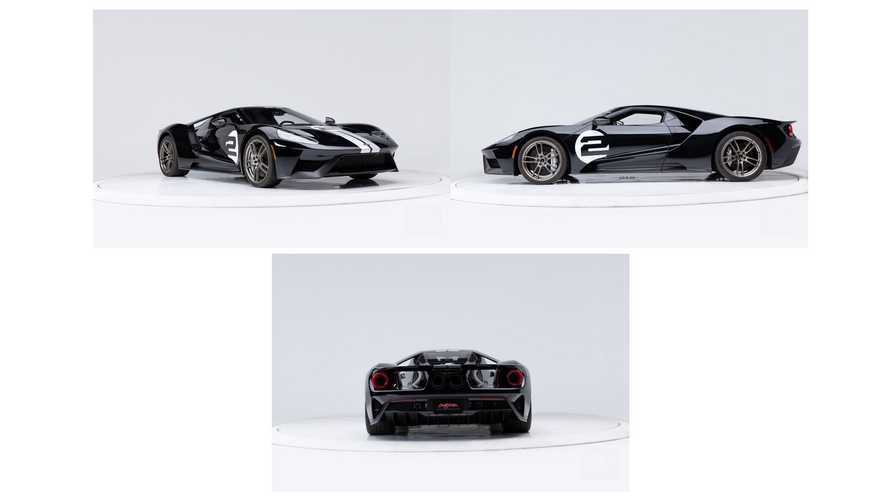 Lucky Barrett-Jackson bidders get a chance at this No Reserve supercar!

A stunning low-mileage 2017 Ford GT ’66 Heritage, coated in a slick coat of Shadow Black with silver stripes, is heading to Las Vegas for the Barrett-Jackson auction from October 3-5. This insane car is being auctioned off with No Reserve, but it might not need one as bidders will be jumping out of their seats to get a chance to bring it home.

“Built in very limited numbers, the second-generation Ford GT was an extraordinarily difficult car to purchase when new due to Ford’s very selective application process,” said Craig Jackson, chairman and CEO of Barrett-Jackson. “This very special No Reserve offering is a second chance at owning one of these amazing supercars. The anticipation for this car will help drive our 2019 Las Vegas Auction to new highs.”

The Heritage GT sports an exposed carbon fiber package and has Frozen White No. 2 graphics on the hood and doors. This machine is a perfect balance of looks and performance. It’s powered by a twin-turbo 3.5-liter Ford EcoBoost V6 matched to a 7-speed dual-clutch automatic transaxle with paddle shifters - adding up to 647-horsepower.

“The 1966 victory at Le Mans is one of the most revered victories in American racing,” said Steve Davis, President of Barrett-Jackson. “The Shelby American GT40 No. 2 car accomplished what many thought was impossible, a victory over Ferrari. Now, over 50 years later, Barrett-Jackson has made the impossible a reality with the offering of this very special ’66 Heritage Edition GT.”