Restored 1956 Jaguar XK140 MC Is The Pinnacle Of British Motoring 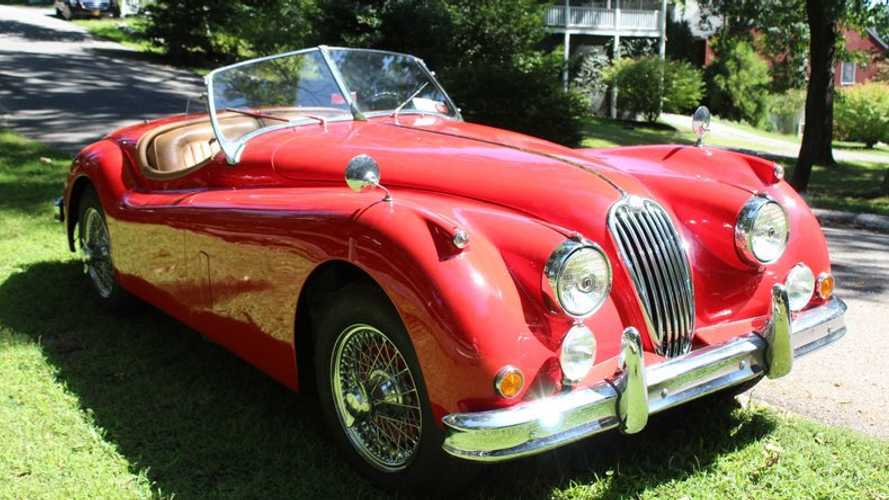 All that's missing are some leather driving gloves!

British roadsters are known around the world as being fun to drive cars, and the Jaguar XK140 is one of the best. This car not only delivers the visceral driving experience expected from a roadster, but it also shows off a timeless, elegant design that Jaguar has perfected. A wonderful example of Jaguar's performance and beauty is this 1956 Jaguar XK140 MC Open Two Seater that will cross will cross the auction block next month at the Rand Luxury Motorcar Auction.

This 1956 Jaguar XK140 MC is being auctioned off as part of The Hine Collection, which includes other iconic British sports cars like the 1948 MG TC, 1970 Jaguar E-Type and 1961 Morgan Plus 4. Like the others from this collection, the XK140 underwent a full restoration by some of the leading names in classic Jaguar restoration. The car itself was restored by a top restoration company in Tennessee, while the engine was rebuilt by a Jaguar engine specialist in California. The best part of this car is that all the original parts were retained allowing this XK140 to retain its status as a numbers-matching classic. When it hits the auction block, it will have an estimated value of between $155,000 and $185,000.

Jaguar only built the XK140 was only built for three years (from 1954 to 1957), although the XK series lasted from 1948 through 1961 – this car is the predecessor to Jaguar's iconic E-Type. The XK140 is powered by a 3.4-liter inline-six that puts out 190 horsepower in its standard configuration, but this XK140 MC (also known as the SE in other markets) had a unique cylinder head that increased the engine's output to 210 horsepower.

The Rand Luxury Motorcar Auction will be held at the Nassau County Museum of Art on October 12, and it will include a wide variety of classic and collectible cars. These range from classic cars like a legit 1969 COPO Camaro and 1963 Ferrari 250 SWB to ultra-rare, late-model cars like the 2014 LaFerrari, 2008 Koenigsegg CCX, 2003 Ferrari Enzo and 2008 Bugatti Veyron. Register to bid on this beautiful 1956 Jaguar XK140 MC or any of the other high-caliber cars that will be available at the Rand Luxury Motorcar Auction.