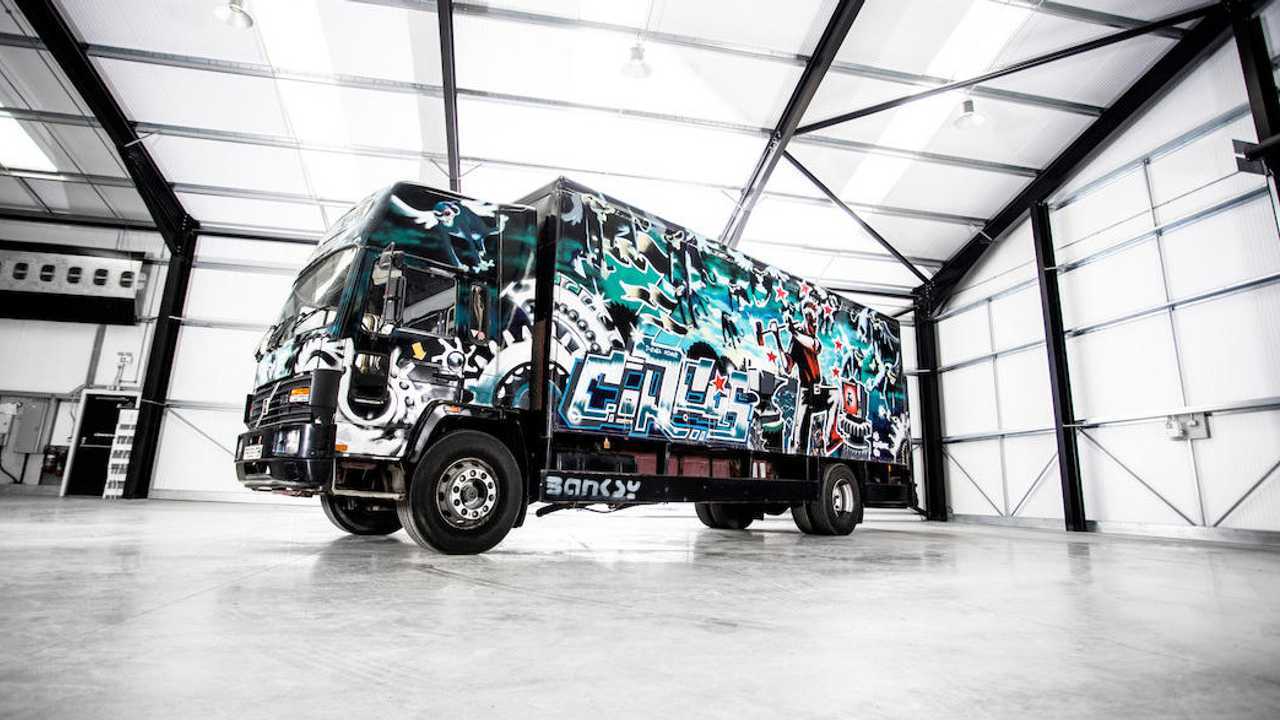 British street artist Banksy is known around the world for making statements with his graffiti, but his biggest statement yet could be made at the Bonhams Goodwood Revival Sale. That's where a 1988 Volvo FL6 box truck wearing a Banksy paint job will cross the auction block, and current estimates project the truck to sell for between $1.3 million and $2 million.

The rolling piece of art is officially called the Turbo Zone Truck (Laugh Now But One Day We'll Be in Charge), and it was painted in 2000 – six years before the mysterious and anonymous became a household name thanks to a 2006 exhibition in Los Angeles. The true value of this truck could actually be that it is a prominent piece from the Banksy's early years, and the designs and messages continue to today. The truck wears the artist's familiar anti-establishment motif, and it's signed on each side of the truck in stencil. Furthermore, this Volvo Truck comes with a certificate of authenticity from Banksy's studio, Pest Control.

The truck was commissioned by the co-founder of Turbozone International Circus in 2000 when Banksy's work was still largely unknown, and it took two weeks to complete Turbo Zone Truck. After being painted, the truck was then used for the circus to travel throughout Europe, and it even made an appearance in South America.

Bonhams' press release pointed out the ties to the art work and the type of vehicle by stating: "Taking the vehicle of the laborer, the workman and the blue-collar employee as his blank canvas, the present motorcar and work of art revels in Banksy's raw and unfiltered wit; a masterclass of the artist's satirical humour and impressive dexterity with spray-paint."

The Turbo Zone Truck will cross the auction block on September 14, and if it sells for what Bonhams expects it to go for, Turbo Zone Truck could set records for both a Volvo and a box truck at an auction.

This Volvo P1800ES Is The Only Car You Need To Own