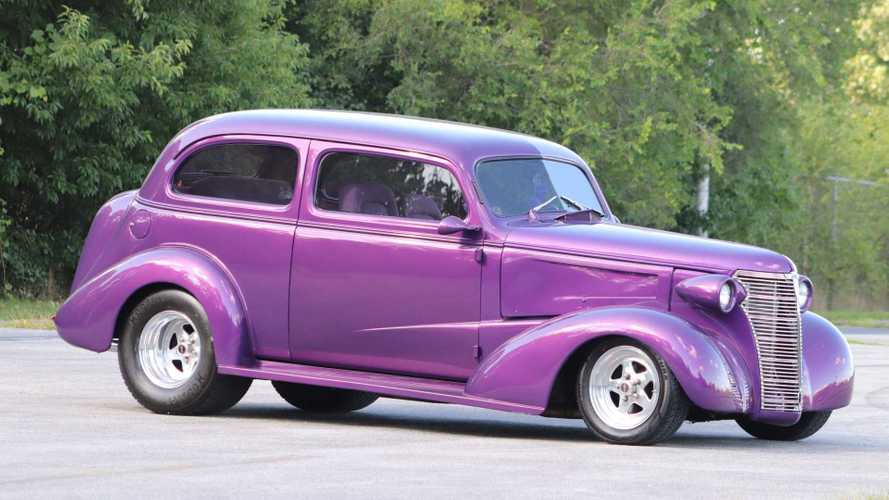 What a sight to see!

♫ Well, I saw the thing comin' out of the sky, it has one long hood and two big eyes. ♫

No, it isn't Sheb Wooley's one-eyed, one-horned flyin' purple-people eater; it is a mean-looking 1938 Chevrolet Master Deluxe that has been tubbed and fully customized. All street rods were designed to be a unique expression of their driver's style, but this '38 Chevy is one in a million. Now it can be yours for thanks to Midwest Car Exchange.

The custom look of this street rod starts with a Royal Plum Metallic paint job (a Ford hue from the late '90s), but the racecar stance really gives this car a unique attitude with skinny (P195/60R15) front tires and massive Hoosier Pro Street radials measuring 15x15.5 in the rear. Shaved handles with power-remote controls for the doors and trunk add a smooth look to the body, and as a finishing touch, the headlights have been frenched into their bug-eyed housings.

To match the exterior, the interior of this Master Deluxe has been completely customized including the fabric-wrapped dash. The low-back front bucket seats have the Chevy bow-tie logo and "'38" embroidered into the seat backs, but it's the rear seat that is the most interesting part of the cabin. Due to the massively tubbed rear wheels, the three-person rear bench seat has been narrowed to a throne for one making this custom street rod a three-seater!

Under that long hood is a Chevrolet 355 CID V8 with tuned port injection, and the engine has been upgraded with Trick Flow heads and coated headers. A Mustang II front end with rack and pinion power steering ensures this car has a smooth ride, while the Ford nine-inch rear end with 3.70 gears and Posi traction lets the engine lay down in its power – in a pair of fat, black strips!

This '38 Chevy street rod is as unique as one of these cars could get, and if that high-impact color and drag radials catch your attention, just imagine the looks you'll get pulling into the car show. The car is listed for sale at $29,900, but you can click here to make an offer on this slick Chevy.

Steel-Bodied Deuce Highboy Roadster Can Be Yours For $70K