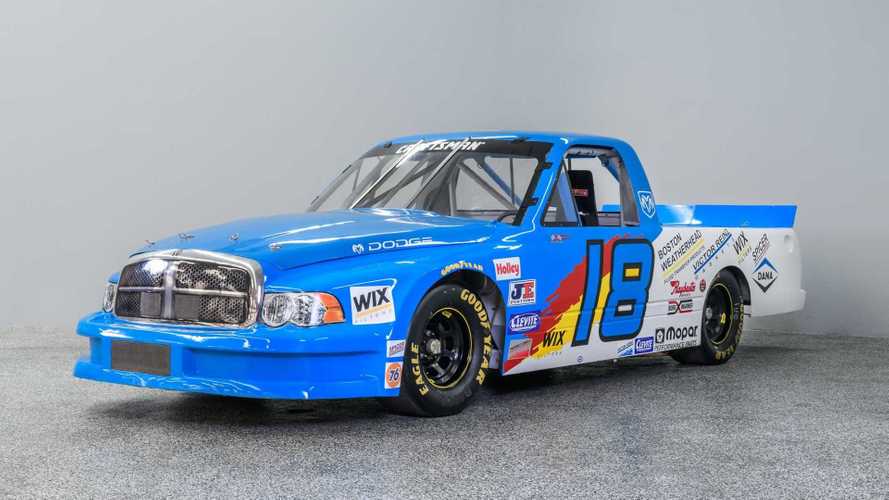 This was part of Dodge's most successful teams in the NASCAR truck series.

Before Dodge made its return to the NASCAR Cup series in 2001, it got its tires wet in what was then known as the NASCAR Craftsman Truck Series (now it's the NASCAR Gander Outdoors Truck Series). Bobby Hamilton Racing turned out to be one of Dodge's most successful teams in the early year of this truck series thanks to the No. 18 Dodge Ram. This 1998 Dodge Ram is an authentic, race-driven truck that played a key role in helping Dodge and Bobby Hamilton Racing grow in NASCAR, and now it's up for sale through AutoBarn Classic Cars.

The Dana sponsorship you see here ran from 1999 until the end of the 2001 season, and with the exception of the first nine races of 1999, Joe Ruttman was the man behind the wheel. During this period, Ruttman racked up five wins in the No. 18 truck including an impressive win from the pole in the 2001 Florida Dodge Dealers 250 at Daytona. This was the first of three Daytona truck wins for Dodge, and all were from Bobby Hamilton Racing.

In 2002, the No. 18 truck switched to corporate Dodge sponsorship with a red paint scheme, so it would appear that this truck ran its last race during the 2001 season. The truck's seller acquired it and left it as is, but it was never raced again. Instead, it traveled around the Ohio area as an educational tool.

That means it still has the race-ready 355 CID V8 under the hood, and this engine was rebuilt in 2004. The chassis, suspension, transmission and rear end are all set up to the same specifications this truck would have run in 2001. The seller is also including some of the team memorabilia such as a team shirt, a flag to fly from atop your motor home and a picture from the Daytona 250 signed by Joe Ruttman and the late Bobby Hamilton.

Gallery: Race Out And Get This 1998 Dodge Ram NASCAR Truck

Ultimately, Dodge dropped out of NASCAR again in 2016 (eight years after Bobby Hamilton Racing ceased operations), but if it hadn't been for the success of Bobby Hamilton Racing and the No. 18 Dodge Ram, Dodge's involvement in NASCAR in the late '90s and early 2000s could have been a lot different.