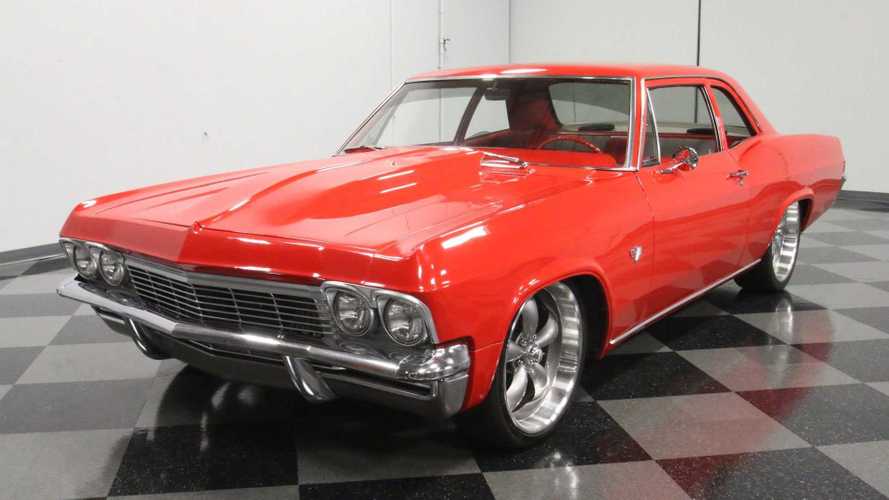 It’s been treated to just the right level of customization.

Streetside Classics is pleased to announce this excellent 1965 Chevrolet Bel Air for sale. For the 1965 model year, the Bel Air was new from the frame down to its entire body, which included curved side glass for the first time. What’s more, an all-new big-block 396 engine joined the lineup–though, a little late. The Bel Air had been the top-of-the-line series from 1953 through 1957, and still remained highly popular when the Impala came along in 1958 to take the top honors.

Open the doors and the interior of this Chevy Bel Air will impress you too. It’s got that overall vintage feel with some particular modern upgrades to add some functionality. The front and rear bench seats are well-fitted with vinyl covers and gray cloth accents. In addition, the matching carpet and Bel Air floormats appear to be flat-out new. A set of white-faced AutoMeter gauges takes the place of the OEM displays inside the silver instrument cluster; it provides a good amount of contrast to the glossy red steel that surrounds it. The underdash air conditioning system will keep you and your passengers comfy and cool in the summer heat, while the Sony stereo and speakers will have you blasting your favorite beats all year long.

If you thought the exterior and cabin were showstoppers, wait until you pop that hood. The stellar engine bay houses a skillfully built 454 cubic-inch V8 framed by a pair of inner fenders that are color-matched to the gloss red exterior. It’s fed by a FiTech fuel injection system and armed with a Dual Spectre cold-air intake and a performance cam to take the power up a notch. Aftermarket headers and the dual exhaust send a commanding exhaust note to your ears and those of passersby. The V8 engine is paired to a smooth-shifting three-speed automatic transmission that's navigated by the B&M shifter inside the cabin. Power steering makes for easy maneuvering and power disc brakes at all four corners with drilled and slotted rotors make for incredible stopping power. This Bel Air sits proudly on staggered Coys wheels, with 20s in the front and 22s at the rear.

General Motors was selling about half of the new cars on the road in 1965, and Chevrolet was selling about half of that number too. Full-sized Chevys (Biscayne, Bel Air, and Impala) made up about 61 percent of Chevy sales and about 15 percent of new cars on the road. Ubiquitous as they were when new, these cars are still highly popular and sought after. While there may be many remaining, this show-quality 1965 Bel Air example is still a hot commodity when it comes to its looks, condition, and power. The current asking price is set at $41,995, and you can make an offer right here.

Cool Off Summer With A Frost Blue 1959 Chevrolet Bel Air