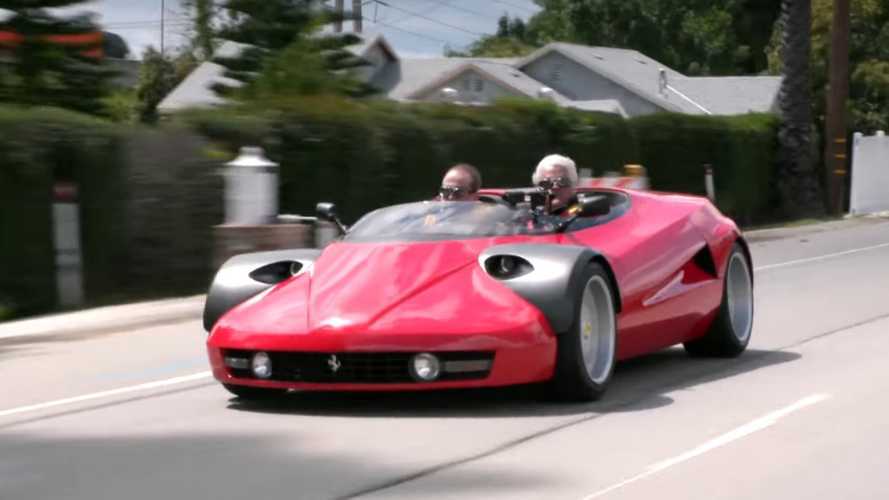 It’s a true Ferrari through and through.

On this episode of Jay Leno’s Garage, you will see a one-of-a-kind 1993 Ferrari Conciso concept car. The beginning of the 15-minute clip shows Leno driving the red-hot Ferrari alongside its owner, Frank Valobra. You see the wind in his hair as he utters some Italian words (that translate to “what a beautiful car”) and the accompanying hand gesture of approval too. Both of them are wearing safety glasses as they speed down the roadway with huge smiles on their faces. Jay Leno is clearly impressed as he compliments the machine’s incredible driving ability and ride quality. At one point, he even refers to the minimalist concept car as a go-kart.

The 1933 Ferrari Conciso featured on this episode is the only one in the world. Let that fact sink in for a moment. It may have a simple design, but it’s a very unique and stylish one at that. As Leno first shows off the car, he points out that the interior features cutaways for helmets on each side–further supporting his go-kart claim. He then introduces Frank Valobra to talk more about the car and its exclusivity.

Right off the bat, Valobra explains that “Conciso” in Italian means concise or the minimum necessary. The car is based off a 1989 Ferrari 328, a German designer named Bernd Michalak sought out to build a car that was lightweight, fast, and easy to maneuver on the race track. And so, he purchased a 1989 Ferrari 328 GTS and removed all the non-essential weight. He designed the new body with aluminum as a means of keeping weight at a minimum. Valobra says Michalak considered the Conciso his “three-dimensional business card,” which showed off his impressive design skills.

Michalak knew that coach-built aluminum bodies were no easy feat, so he went to the masters in Maranello, Italy. Bacchelli & Villa are two historic names when it comes to the Prancing Horse, as they have been responsible for many Ferrari race cars.

Franco Valobra bid on this 1933 Ferrari Conciso at an auction and says the lightweight Ferrari concept cost a lot less than he was willing to pay.

“Nobody bid on it. Nobody knew the story; nobody knew what the car was,” Valobra said. “We were the only bidder, and we got it right away.”