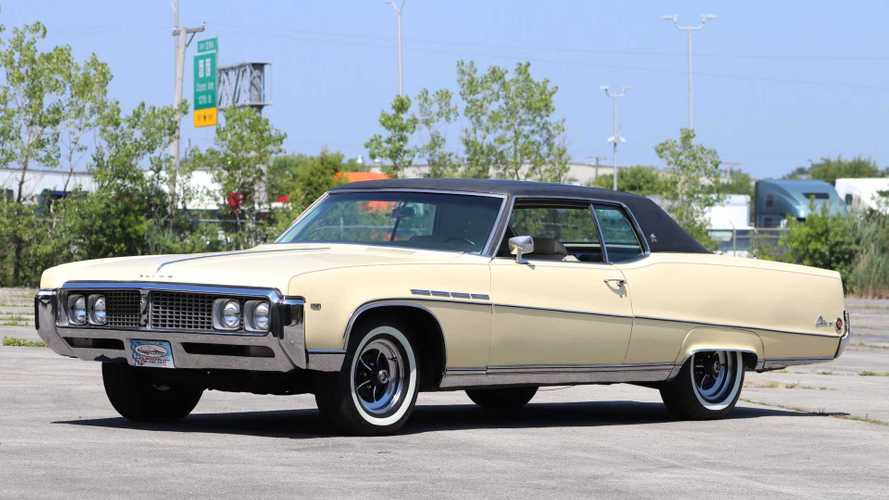 Owned by the current holder for close to three decades.

Midwest Car Exchange is pleased to announce this 1969 Buick Electra 225 Sport Coupe up for sale. This car is a beauty; just look at how that factory Cameo Cream paint hugs the large, graceful body with its iconic tapering Sweepspear lines. Each front fender is aligned with four ventiports, while the rear wears its own fender skirts. The current owner of the car has cared for this Buick Electra 225 for nearly three decades! Now, it’s your chance to take this beautiful example into your own hands and continue the legacy.

The Electra 225 was the king of full-size Buicks in the mid- to late 1960s. Measuring in at 18 feet, 8 inches long, the Electra was the largest vehicle in Buick’s 1965 lineup. This particular model year brought redesign changes across GM’s entire fleet, with more coke bottle-inspired styling cues of the muscle car era. Buick’s trademark ventiport holes in the fenders are also easily recognizable in cars from this time.

The most notable switch for the 1967 model year was the chance to Buick’s new 430 V8 engine that is rated at 360 horsepower. This new powertrain replaced both the 401 and 425 Nailhead engines. For 1969, the Buick Electra 225 series saw major restyling cues to keep up with GM’s latest full-size designs. The car appeared to be less blocky and more graceful, as is apparent by those long body lines. The new styling cues greatly resembled the Cadillacs of the same year.

The Buick Electra was offered as a four-door sedan or hardtop, and as a two-door coupe or convertible. The car came with power everything, a nice interior, woodgrain dash accents, and a cigar lighter for the back seats. The Sport Coupe offered up for sale here includes a parchment seat interior, power steering, an electric antenna and clock, the original AM/FM radio, power windows, a tilt steering column, and automatic climate control air conditioning. It’s dressed in a beautiful Cameo Cream paint with a black vinyl roof that gives it just the right amount of contrast.

This 1969 Buick Electra 225 Sport Coupe sits on Buick Rallye wheels wrapped in wide whitewall radial tires. Other exterior features include power disc brakes up front, protective moldings on the body side and front fender, and a 2 ½-inch dual exhaust. This Electra is powered by a recently-rebuilt 430 cubic-inch V8 engine with a four-barrel carburetor. It’s mated to a Turbo-Hydramatic 400 automatic transmission that was also just rebuilt. The car runs like a dream and looks like one too. Don’t miss your opportunity to own this beautiful and elegant Buick Electra Sport Coupe.

1971 Buick Electra Deserves Your Love Too