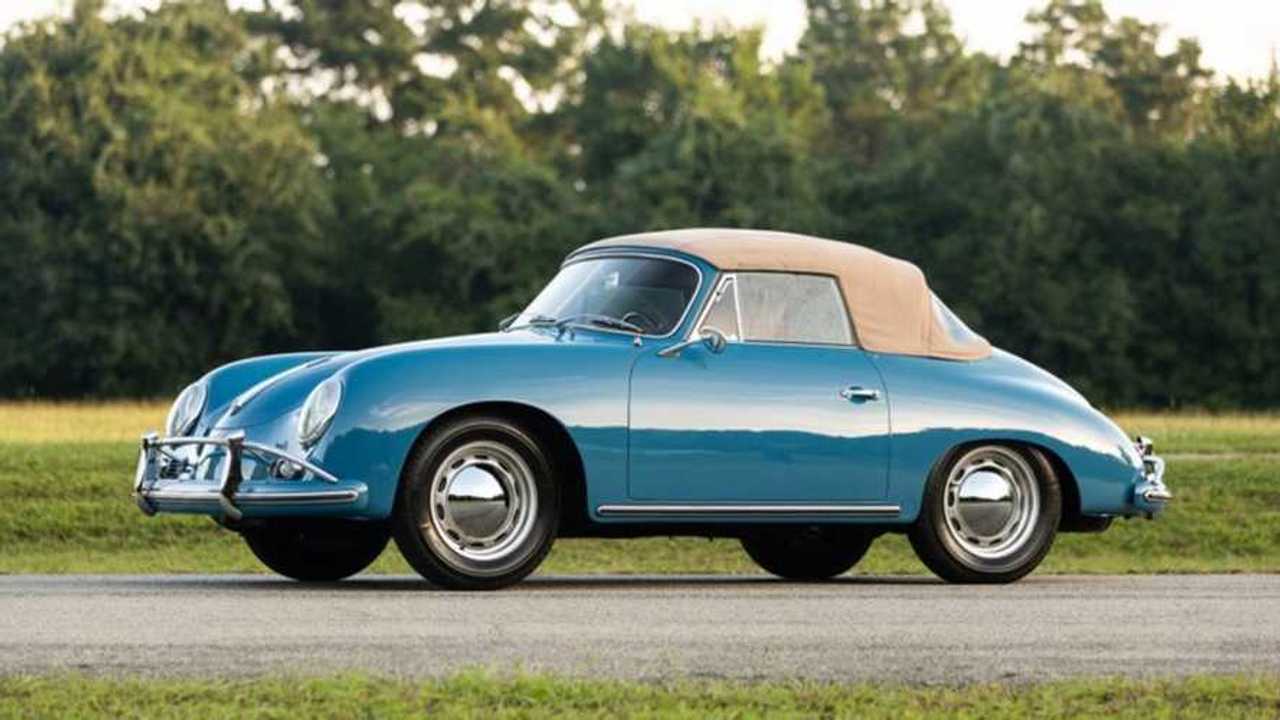 What you see here is a beautiful example of the final year for the Porsche 356A Cabriolet. This model was completed on March 26, 1959 as a U.S.-spec Reutter Cabriolet, distributed by Hoffman Motor Car Company of New York. This stunning 1959 Porsche 356A Cabriolet wears a pristine Amalfi Blue and Silver Metallic paint job over a rich red leatherette and corduroy interior. The car is currently offered up for sale through DriverSource, and they have yet to see another car with this unique color combination. If you have been in the market for a rare and eye-catching Euro sports car, look no further.

The Porsche 356 is a lightweight and nimble rear-engine sports car with rear-wheel-drive, available in both hardtop coupe and convertible configurations. Production for the Porsche 356 began in 1948 and continued until 1965. Of the 76,000 models originally produced, it’s believed that just approximately half survive. Engineering innovations to the 356 continued well into the model’s later years, contributing to the car’s success in motorsports and overall popularity. Each subsequent model of the Porsche 356 gained an enthusiastic following; with them came mechanical improvements, added comfort, and increased drivability. The beautiful minimalistic design and enjoyable ride of the Porsche 356As is only part of what makes these models so desirable, as they truly represent the core nature of the brand.

This 1959 Porsche 356A 1600 Reutter Cabriolet is numbers-matching throughout. The car has been verified by Porsche Kardex and comes with a Porsche Certificate of Authenticity. Optional equipment includes USA bumpers, Dunlop tires, and “Boge” shock absorbers. The sale of the vehicle includes the owner’s manual, a jack and spare tire assembly, and a Concours-quality tool kit. The engine bay is very tidy and largely correct; it houses the original numbers-matching 1,600 cc engine.

As a near lifelong Texas car, this 356A Cabriolet is said to have had only four owners since it rolled off the factory floor. It includes a written summary of the 356’s history compiled by its most previous caretaker. Residency of this example includes California, as well as Houston, Austin, and San Antonio, Texas. The dry Texas environment has treated the 151812’s chassis very well, which appears to be original from the front to the rear.

This Porsche has been treated to cosmetic and mechanic refreshes as needed, though it remains very honest throughout. A renowned Texas restorer, Jeff’s Restorations, performed a 2019 freshening to the gorgeous Amalfi Blue paint. The top was also replaced with a Robbins zip-out window, while keeping the original headliner and Reutter frame. Autos International provided the striking leather interior and oatmeal wool square weave carpeting in recent years, while Porsche upholstery specialist GTS Classics installed the correct corduroy seat inserts in 2019 as well.

A matching spare tire assembly with leather strap resides up front, along with a Concours-quality jack and complete tool kit, while the engine bay is very tidy and largely correct, displaying its original numbers-matching powerplant. Apart from looking incredible, the car also runs like a dream. It received a recent service in 2018 with new shocks, a new battery, and a rebuild/tune of the Zenith carbs.