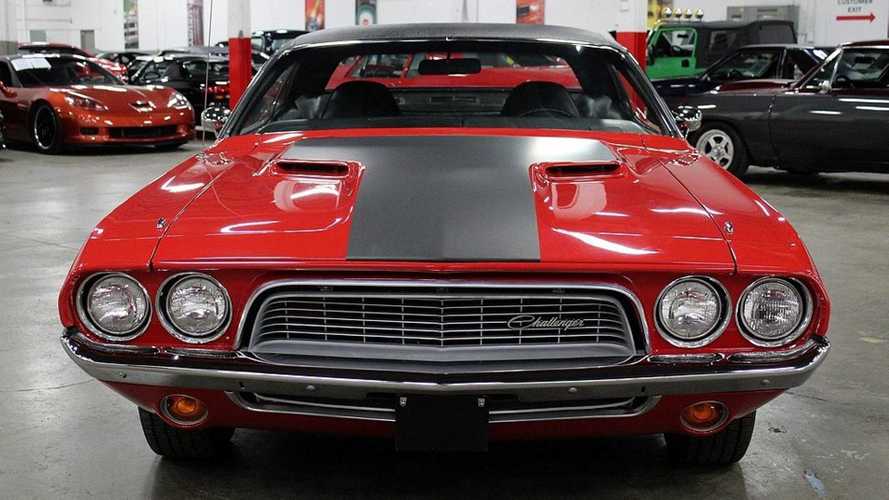 A stunning example of a highly desirable American icon.

If you have been in the market for an iconic American muscle car, then you’re in luck. GR Auto Gallery is pleased to announce this bold and beautiful 1972 Dodge Challenger up for sale. Dressed in a brilliant Rally Red paint job, the exterior shines at every angle and is in pristine condition. It’s nicely contrasted by the tidy black interior with wooden accents. Overall, this example is in immaculate condition and was taken care of with love. Everything from the door panels to the dashboard and floor mats are like-new and very clean.

The heart and soul of this bad boy is a massive 440 cubic-inch V8 motor paired to a smooth-shifting 727 automatic transmission. This 1972 Dodge Challenger received a full restoration, which includes the powertrain. The odometer reading on the add is 808 miles.  Other features include front disc brakes, power steering and heat, all-new front suspension, and a 391 Sure Grip Posi rear end. The sale of this vehicle comes with a full folder of receipts for the restoration and general maintenance paperwork.

The Challenger debuted in the fall of 1969 for the 1970 model year. The first-gen was positioned to compete against the Mercury Cougar and Pontiac Firebird in the higher end of the pony car segment. It was also a fairly late response to the Ford Mustang, which was introduced in April of 1964. Nevertheless, the American automaker intended for the Challenger to be the most potent pony car and produced a number of trim and option levels that included virtually every engine in Chrysler’s lineup.

The 1972 Dodge Challenger received just a few minor changes. For one, the grille sloped down on either side and extended below the bumper, where the headlights were housed in their respective panels. The taillights were also located in two separate housings on each side of the rear valance. The Rally grille and rear tail panel were both blacked out. Shaker hoods were left behind and replaced by either a flat hood or twin dummy scoops. The bumpers were also chromed out instead of being body-colored. Although some options were changed, buyers could still add front and rear spoilers, rear window louvers, and power accessories like seats and door locks.