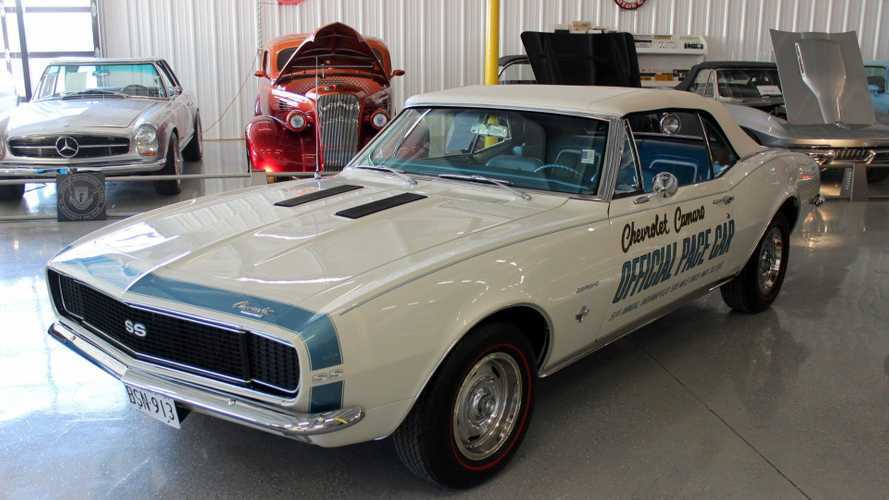 Only a handful of these cars were produced.

Each year all eyes are on the Indianapolis 500, one of the biggest motorsports spectacles out there. Can you imagine owning an artifact from one of the past races? You can with this 1967 Chevrolet Camaro Convertible Pace Car. GM used the car to increase public awareness of the Camaro, which was up against some stiff competition. Not only was this car used for official purposes at the event, it marks the first production year of the legendary American muscle car.

Like all the other pace cars, this one wears a nice coat of Ermine White paint with a blue nose stripe, blue pinstriping, and graphics on the doors identifying the car’s purpose. The paint is shined up nicely and all the graphics are free of noticeably blemishes. The same can be said of the brightwork, white cloth top, and stock 14-inch Rally wheels with red line tires.

Adding the appropriate level of drama to this car is the Bright Blue interior. All the original equipment is present, while the vinyl seats are carpeting are in excellent condition. That means a pure experience, or exactly what this car was like back in the late 1960s.

Chevrolet used Camaro RS and SS models for these pace cars, and this one is the more desirable SS. That means a 350ci V8 with 4bbl carb is the standard setup. This one has an automatic transmission plus a 12-bolt rear end. Rounding out the car is a dual exhaust, power steering, and manual front disc brakes with 4-pisoton calipers. In other words, the mechanicals on this ride have been preserved, instead of modifications being installed.

It’s true that only 3 of these cars actually paced the Indy 500, more were created to use at the event for transporting dignitaries and other things. After the race, GM decided to sell the cars through its Los Angeles factory using the “special fleet L181A” code. Enthusiasts and others took advantage of this offer, but not all of these cars have survived. That makes this Chevy Camaro especially intriguing. This pace car is being sold through Triple F Automotive.

Have Some Topless Fun In A 1966 Chevrolet Corvette Roadster