1996 Ford Mustang SVT Cobra Is A Ray Of Sunshine 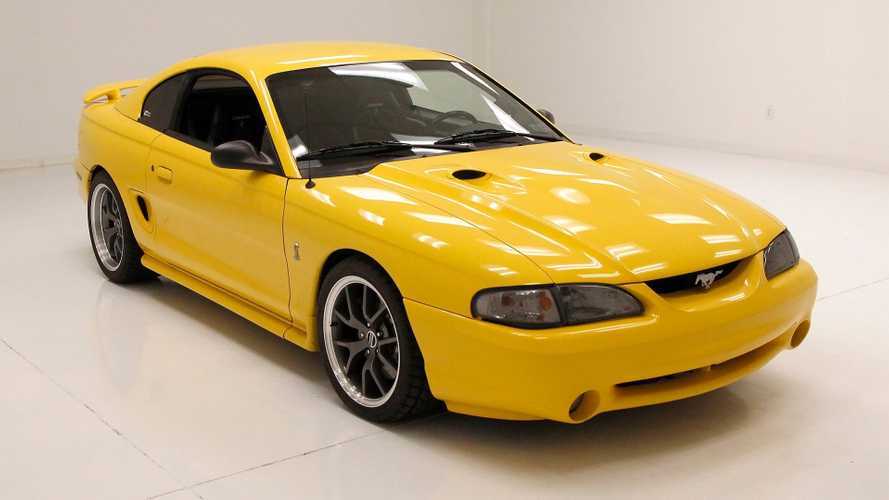 The biggest change for the 1996 SVT Cobra was the move to a brand-new, unique powertrain – a hand-assembled, all-aluminum, dual-overhead cam (DOHC) 4.6-liter modular V8 engine. Ford had chosen to build the DOHC power plant off-line using a dozen two-member teams, rather than mixing the thoroughbred Cobra V8 motor among lesser ones at the Romeo, Michigan facility. Each team would build one DOHC engine from start to finish and then sign off on their project before sending it on its way. The personalized touch is also a practice at Aston Martin, the most exotic nameplate owned by the Ford Motor Company.

This 1996 Ford Mustang SVT Cobra produces 305 horses, a 65-horsepower increase over the previous year. It’s good for a 5.9-second 0 to 60 time, a 13.9-second quarter-mile, and a top speed of 152 mph. The previous owner also states that there are well over $10,000 worth of improvements under the hood that were installed by a Ford Master tech, so you can rest assured that this bad boy runs extremely well. The power goodies include a Kenne Bell supercharger kit, JLT cold air intake, upgraded runners, and BBK chrome headers, among others.  A Stage 2 clutch, pressure plate, and flywheel work with the 5-speed manual transmission to handle all the extra power.

Apart from its impressive performance figures, this stunning SVT Cobra started its life out from the factory in Laser Red paint. It has since been resprayed in yellow as far as the eye can see, except for the badging. The car sports a rear spoiler, correct SVT and Cobra badging, and custom staggered American Racing wheels on all four corners.

Gallery: 1996 Ford Mustang SVT Cobra Is A Ray Of Sunshine

The interior features Corbeau Racing style seats have cloth-stitched inserts and vinyl bolsters with body-hugging contours that keep you snug in the seats and comfortable during long rides. The iconic Mustang twin eyebrow dashboard is a deep black color and has white-faced gauges for a nice accented appeal. The floor mats include the Cobra logo embroidered in gray with black backgrounds that keep the black carpets nice and clean.

The undercarriage of this car is rust free and very clean, as well. All in all, this 1996 Ford Mustang SVT Cobra has all the power and looks that a muscle car should have in a bright yellow hue that will turn heads before you even start it up. Make it yours today and bring some added sunshine into your life.