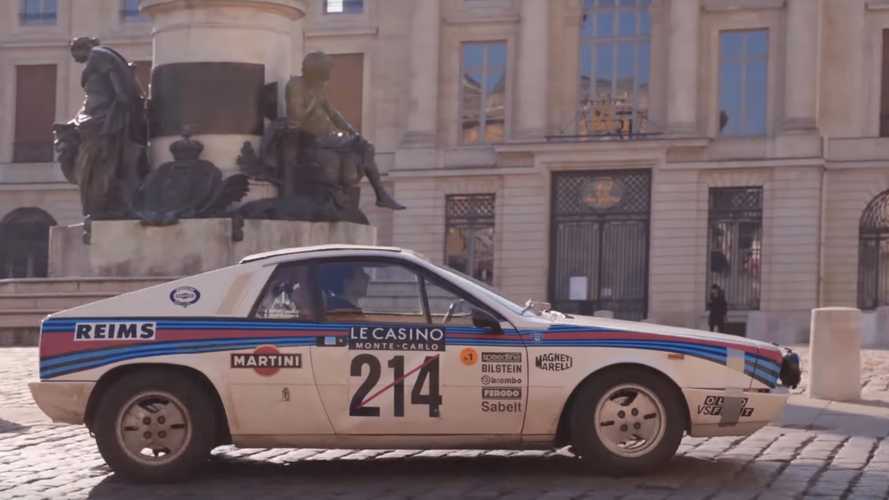 Learn about the creation right here with Gabriel Valentin.

Various motor racing teams race under the Martini Racing designation when sponsored by the Italian company Martini & Rossi, a distillery that produces Martini vermouth. The sponsorship program was founded by Count Metello Rossi di Montelera of Martini & Rossi, and dates back to 1958 as Martini International Club. The race cars are adorned with dark blue, light blue and red stripes on white, red or silver body cars. Martini Racing’s livery is one of the most well-known liveries in the world and easily recognizable – even if you’re not huge into motorsports.

The model that's won the most titles for the racing team is the Lancia Delta HF Integrale. Other race cars that wore the livery include Porsche, Alfa Romeo, and Lotus, among many others. That leads us into the video above, which features a 1977 Lancia Beta Montecarlo that was created by a man named Gabriel Valentin for Martini Racing. The YouTube clip is in French, so you may have to add closed captioning if you are not familiar with the language.

Gabriel Valentin has been passionate about rallying, specifically the World Rally Championship, since the late 1990s. Although he was just a child at the time, his father was a sponsor at Dakar and had two Range Rovers in the Paris-Dakar rally. His interest in WRC led him to idolize some well-known drivers like Didier Auriol, Carlos Sainz, and François Delecour.

The video sees Gabriel Valentin drive a 1977 Lancia Beta Montecarlo S1 and discuss his passion for old cars. When he watched Didier Auriol at the Rallye Monte Carlo during Toyota’s successful years in the sport, Gabriel Valentin longed to drive a full-size version of his Celica remote-controlled car. Some years later, he and his friends created a replica of the iconic Castro-liveried Group A rally car thanks to the help of Toyota. Gabriel held a career in marketing for 15 years before landing a great job with Martini Racing, which provided him with the dream opportunity to create the Lancia you see in the video above.

Someone came into his office and said, “Hey, since you’re passionate about antique cars, next year will be 50 years of Martini Racing.” The rest is history. Watch the clip to learn more about the journey that led to this 1977 Lancia Beta Montecarlo adorned in the renown Martini Racing livery. It’s truly a remarkable story and shows some great shots of the car both inside and out.