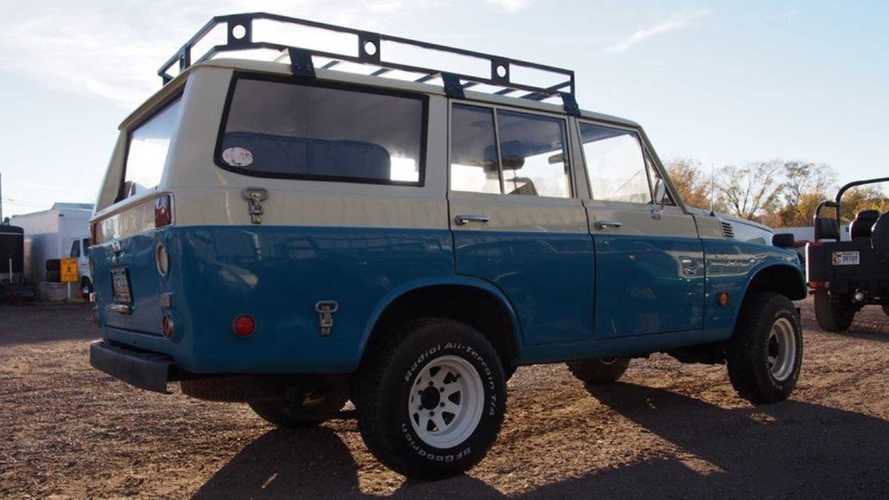 Despite a subtle exterior appearance, this Land Cruiser has custom features.

Toyota’s Land Cruiser series of trucks are some of the most desirable models the brand has ever offered. It’s always interesting to see how people customize their Land Cruisers, especially considering that they aren’t the most accessible chassis one can choose from. While it is neat to see original examples, this 1969 Toyota Land Cruiser FJ55 features an engine swap from the good ‘ol Ford Motor Company.

Vintage Cruisers of Flagstaff, Arizona offers this rugged Toyota for sale. Being a specialist in Land Cruisers, it is safe to say that this example was thoroughly inspected prior to the for sale listing, and it is a solid FJ55.

The exterior features a beautiful white and blue two-tone paint scheme, which is nicely complemented by white wheels with beefy BF Goodrich tires. Having lived in California and now Arizona, this example is rust free. Additionally, the body of the truck was both water and rust proofed, making it an excellent choice of vehicle for going off the beaten path.

Inside the cabin, you’ll find a fairly utilitarian interior with a handful of comforts. The front sport seats are a more modern style, while there’s also a locking center armrest and cup holders for extra convenience. Meanwhile, the rear features a bench seat, as well as third-row jump seats.

Of course, there’s the engine swap. The powerplant is a fuel injected 302 cu.-in. Ford V8, which pairs to a 4-speed manual transmission. Much like the Chevrolet-swapped FJ40 we recently featured, this example uses a 4-speed transmission, but it’s hard to tell if it is a Ford unit, or a Toyota transmission utilizing a bellhousing conversion. As an added comfort, this truck features power steering.

Would this Ford-swapped FJ55 be the right Land Cruiser for you?