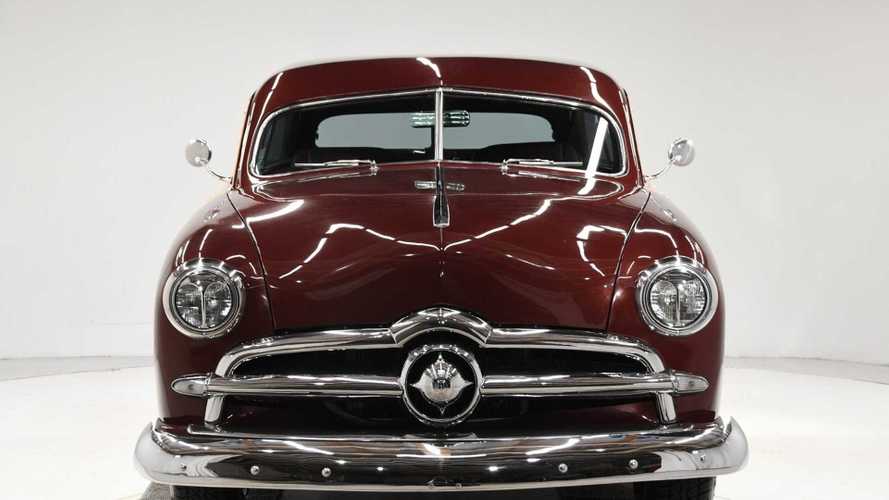 This is one hot, hot rod.

This 1949 Ford Country Squire Station Wagon is truly a unique and classy hot rod. It’s got the looks and power to impress, and several great features to boot. This woody wagon is currently up for sale by the Volo Auto Museum in Volo, Illinois. The asking price as of this writing is $52,998, which is slightly aggressive pricing; however, this car is a rare classic and in excellent condition. It is a very unique-looking and comfortable car that four people could enjoy. What’s more, you could fit some lawn chairs and a cooler for when you go out and enjoy it to the fullest.

We cannot stress enough just how unusual, in a good way, this station wagon really is. It is the epitome of the distinct Ford styling of the ‘40s and ‘50s. This Ford Country Squire is a chopped woody, which takes its hot rod appearance to the next level. The chopped roof was done after the fact, but it was carried out so well that it looks like Ford made it that way. All of the sheet metal is straight and the maroon paint is immaculate with an extra dose of flake and clearcoat. Up front, all of the chrome has been redone to emit a shine like no other. The rear of the car was simplified by removing the spare tire and original taillights. Teardrop lights and a flush gas cap were installed instead and the license plate was countersunk. The tailgate, doors, and windows all function like new.

The interior includes four bucket seats with seatbelts from a 1968 Chevelle that have been completely recushioned and reupholstered. Other goodies include a full-length custom console, custom gauges, tilt steering column with banjo wheel, CD stereo, air conditioning, and a glove compartment. All of the interior metal is painted in maroon to match the exterior.

This hot rod rides on reproduction 15-inch Kelsey-Hayes Style wire wheels with spinner hubcaps wrapped in fat whitewall BFGoodrich radial tires. The engine compartment features a custom-made stainless cover that adds to its aesthetic appeal. The entire underhood area is clean and houses a Turbo 350 Vortec motor mated to an automatic transmission that delivers 300 horsepower. This 1949 Country Squire is also equipped with an upgraded aluminum intake, Holley carb kit, and HEI ignition. An aluminum radiator with auxiliary electric fans helps to keep it running cool and consequently producing optimal performance. A new power brake system was installed as well to provide the ultimate stopping ability. It received a thorough off-frame restoration as well.

It’s not hard to see that this 1949 Country Squire Station Wagon is a catch and then some. It has recently been treated to several nice improvements too, like a custom independent suspension system with tubular control arms and new shocks. This example is in tip-top condition from the outside to the inside and the undercarriage.