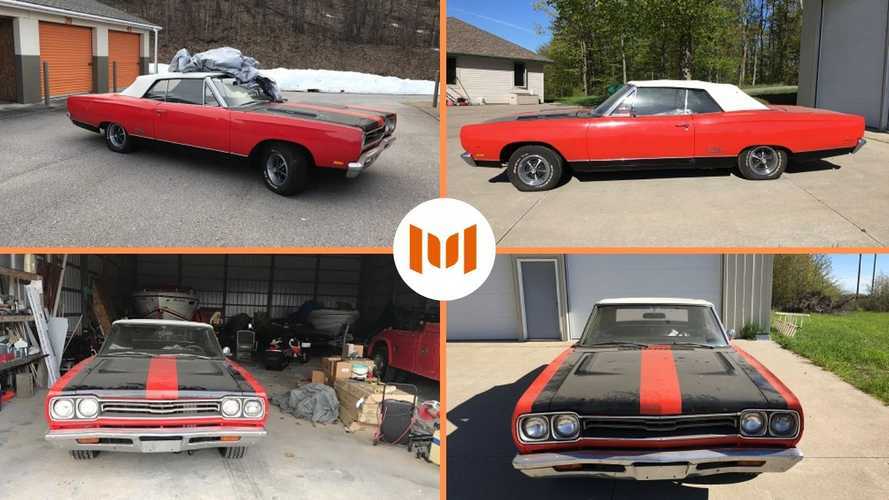 Discovered in a storage building after being parked for decades, this American muscle car be auctioned by the police

We find it baffling how cars get locked up in garages and totally forgotten about for years, only to be discovered by someone who never knew it was there. It’s even more head-scratching for enthusiasts when it’s a desirable car such as this 1969 Plymouth GTX Convertible that’s soon to be auctioned.

Detroit News reports that this classic Plymouth was discovered in a storage building, northwest of Traverse City, Michigan. Incredibly, the building had changed hands several times with nobody discovering the muscle car for decades. Thankfully the potent convertible was sheltered well and appears to have survived its solitary confinement intact.

More on American cars:
- The Ford Starliner Was Built for 1 Year Only
- A 1987 Buick Regal GNX This Clean Is An Extremely Rare Find

Finished in a distinctive combination of red with contrasting black stripes, the images released appear to show the Plymouth is in great condition. While there is a fine layer of dust all over the car, and the tires have seen better days, the bodywork appears rust-free and absent of any noticeable dings — even the convertible roof looks to be in good shape. Police did attempt to track down the owner through the cars identification number, but to no avail.

The GTX has only covered 21,000 miles from new, making this auction lot one for collectors. Details are scarce with no images of the car’s interior or a report on its mechanicals. It’s said that the car is lacking a battery, meaning it has likely been parked for a very long time, so we assume it will need some work before that motor is fit to fire again.

The second generation Plymouth GTX was launched in 1968 and could be bought in hardtop or convertible body styles. It came standard with a 440 CI V8 engine, or could be specified with a Hemi V8 — there’s no news on which motor this example has. Just 701 GTX Convertibles were produced in 1969, with just eleven possessing a HEMI under the hood.

The online auction is running right now, with the final bid being accepted on 18 June 2019.