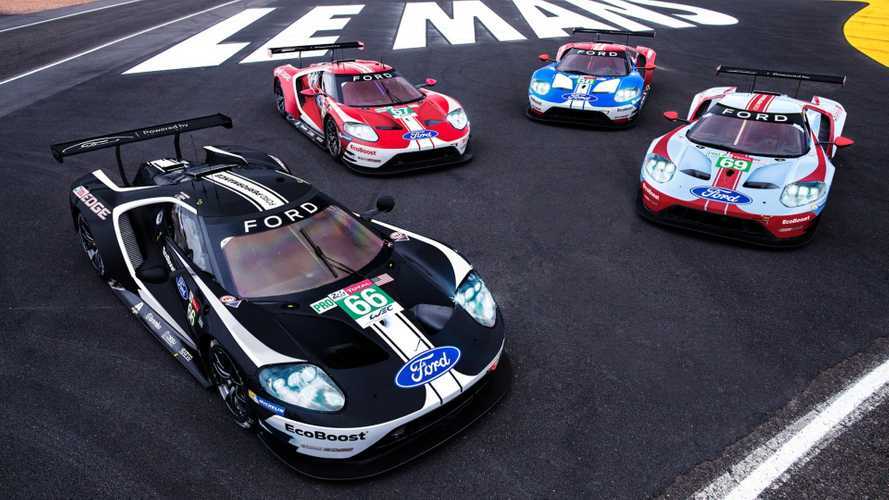 This will be the Ford GT's last factory backed Le Mans 24 hour endurance for now.

Today’s Ford GT endurance racers, and indeed the road car, can trace its roots back to the historic Ford vs Ferrari rivalry of the 1960s. The legendary 1, 2, 3, GT40 finish in 1966 is one of motorsport’s greatest stories, crowned by the fact that exactly 50 years later Ford won its class in the modern GT. The racer has seen much success, but this year’s Le Mans 24 Hour event will be the last factory effort for now. Marking the occasion will be a quartet of historic racing liveries.

Today Ford has revealed a series of ‘celebration liveries’ that its four GTE Pro contenders will wear. The Chip Ganassi Racing team are running the cars with Ford’s backing for the last time, with these designs paying homage to milestones throughout the model’s racing history.

More on the Ford GT
- Jay Leno Learns The Secrets Of His 2005 Ford GT
- Ford GT Once Owned By John Cena Listed For Sale... Again

Car 66 proudly displays the victorious black and white livery from 1966 where Bruce McLaren and Chris Amon first won the French 24 hour race. Number 67 is finished in an eye-catching red and white scheme that harks back to the A.J. Foyt and Dan Gurney piloted GT40 of 1967 that also won the event. Ford GT 69 honors the GT40 that came second in 1966, and the final car hosts the familiar colors seen on the modern GT that won in 2016.

In the 1960s Ford entered Le Mans in what was a rather personal fight with Ferrari. The aim was to dethrone the Prancing Horse, proving that Ford’s snubbed acquisition of the Italian marque made the blue oval no less capable. Run by the Shelby American team, the GT40’s dominated the prestigious endurance race in 1966, and won again in 1967. 1968 and 1969 were then won by GT40s run by John Wyer Automotive Engineering.

Bill Ford, executive chairman, Ford Motor Company said: ‘In 2016, Ford returned to Le Mans to mark the 50th anniversary of our incredible 1966 win, and we celebrated in the best way possible by winning the race. To stand on that podium on behalf of the employees was a proud moment for me and I look forward returning to Le Mans this year to support the team as we approach our final race in this chapter.’

While other teams will likely continue to run the Ford GT in competition, it’s sad that the factory effort is coming to an end after such success. However, we’re excited to see these historic liveries make a Le Mans 24 Hours comeback.