Low-Mileage Chevrolet Corvair Is Beautiful At Any Speed 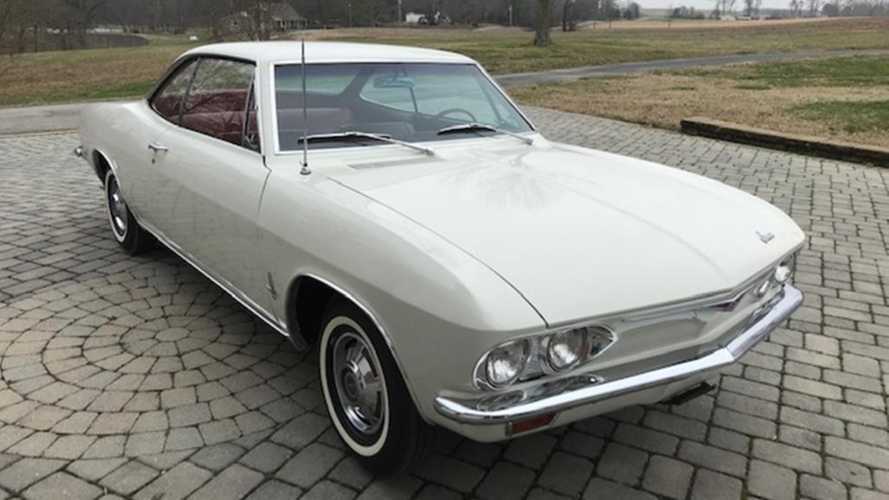 This handsome second-generation Corvair claims to have covered just 30,000 miles from new.

The Chevrolet Corvair was certainly an innovative, if controversial, car of its time. The air-cooled rear-engine layout was somewhat exotic for American vehicles of the era, and something that boosted practicality. This second generation coupe model heading to auction with Tom Mack Classics is a prime example of the second generation Chevrolet.

With just 30,000 miles showing on the odometer, this pristine Corvair has been restored to factory specification. Appearing in an unblemished shade of Ermine White after a repaint, the distinctive shape of this model makes for an attractive classic. Its almost symmetrical design is well resolved, and the lack of a traditional front grille, gives this model a somewhat futuristic tone.

Blow Everyone Away In A 1961 Chevrolet Impala Restomod

The interior of this Corvair is finished in red upholstery, providing a dramatic clash with its exterior hue. This cabin is just as immaculate as the bodywork with the passenger space transporting occupants back to 1965. Large windows provide plenty of natural light, and the minimalist dashboard further boosts a sense of space.

Its air-cooled 262 Ci engine with twin carburetors is paired with an optional four-speed manual transmission. The lot description states that this Corvair Monza ‘runs and drives great’, making it a promising acquisition for a collector.

The Chevrolet Corvair gained infamy with the book ‘Unsafe at Any Speed’ by Ralph Nader. He stated that the rear-engined layout gave the model unconventional handling traits that he accused of being outright dangerous, however, National Highway Traffic Safety Administration’s period investigation found that the car posed no greater risk than any other on the road. A combination of this slandered reputation, and competition from the Ford Mustang, saw Corvair production end in 1969.

The Chevrolet Corvair was available in a wide range of body styles that included everything from a convertible to a station wagon, with the coupe proving the most popular. This great low-milage example hits the auction block on 14 June 2019.