This Plymouth Barracuda Will Have Onlookers Green With Envy 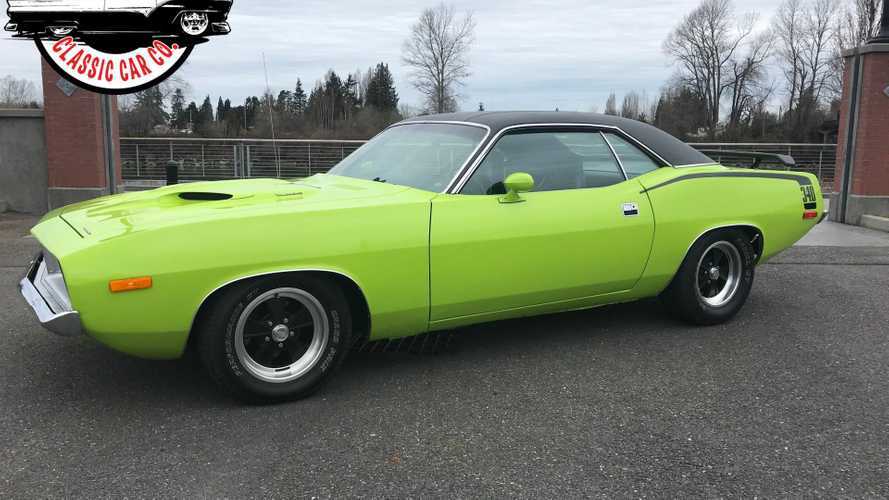 An icon in the world of muscle cars, this 'Cuda is in the perfect specification.

There’s something truly captivating about 1970s muscle cars, isn’t there? This golden decade produced some incredible cars, each with their own character, and often accompanied by a vibrant color pallet. Mean green machine seen before you is a 1974 Plymouth Barracuda being sold by Lost and Found Classic Car Co as an extremely tempting classic Mopar proposition.

Said to have won multiple trophies from local Mopar meets, and we can certainly see why it caught judges attention. Finished in an acidic shade of factory ‘Lime Light Green’, this ‘Cuda cuts a bold shape into the foreground. Bulging bodywork, contrasting decals, hood nostrils — it’s not short on visual drama that’s for sure!

The interior is finished in black, a nice contrast to the bright paint but also a good match for the car’s vinyl roof. Everything looks in excellent condition, especially when you consider that this car is now 45 years-old. Being a manual model, this example features a sought after pistol grip shifter which we can imagine would be incredibly satisfying to use in an old-school muscle car.

While there appears to be a little bit of rust in the trunk, the car is actually impressively well-maintained. Images from the underside of this car shows it to be in excellent condition, a sight of a classic that has been properly cared for.

Of course, a big part of any muscle car is under the hood, and this genuine BS23 fender tagged Plymouth doesn’t disappoint. Hidden beneath those prominent nostrils is a 5.6-liter, 340 cubic-inch V8 engine that’s accompanied by a 4-barrel carburetor. As something to look at it is mighty impressive, but we bet it’s even better in motion.

This ‘Cuda was built in the final year of production for the model, with it being dropped before a new 1975 car could replace it. This was largely due to the energy crisis of 1973, and spiraling fuel prices resulted in thirsty muscle cars falling out of fashion.

A Plymouth Barracuda such as this one is becoming harder to find these days, so adding this 1974 example to your garage at $39,500 might make for a good investment.