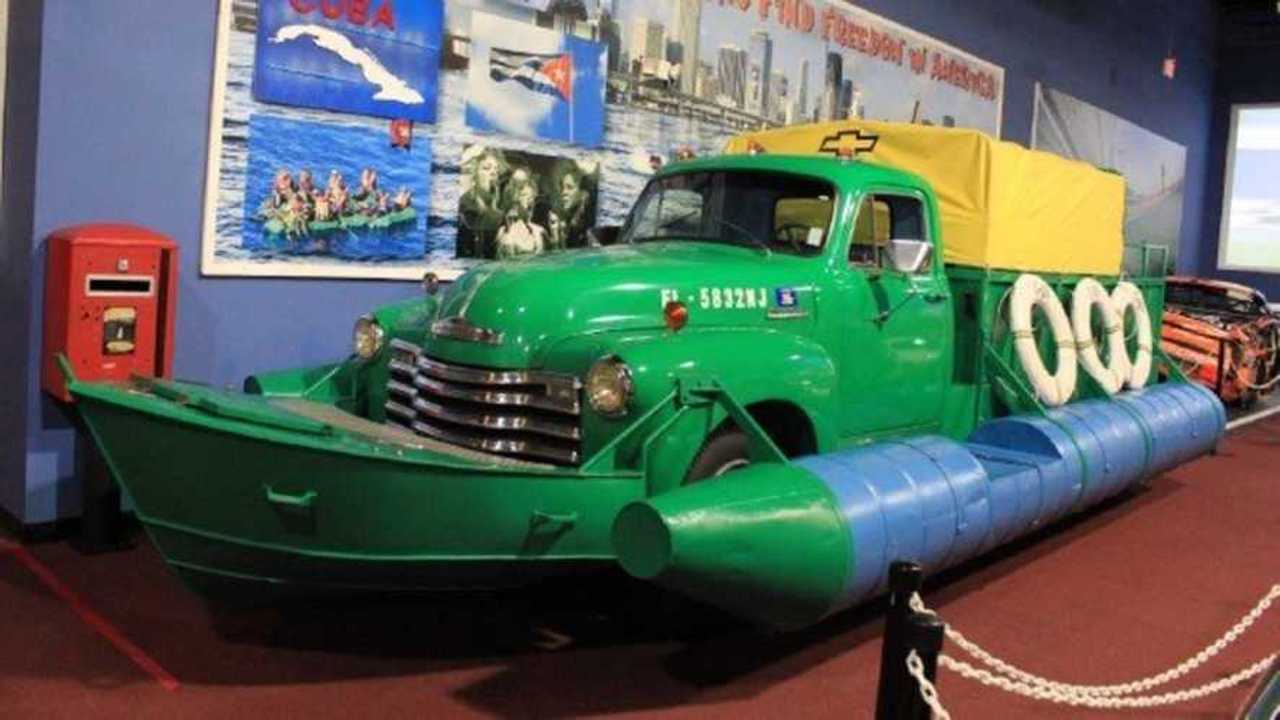 In 2003 the US Coastguard came across a homemade amphibious truck from Cuba. This replica celebrates that incredible voyage

For all of its flaws, the human race is a creative bunch. Our drive to achieve what seems impossible has put men on the moon, fly at hypersonic speeds, and map the entire globe. Human ingenuity comes in many forms, including this wonderfully bonkers truck-turned-boat dubbed the ‘Cuban Mobile’ offered by the Orlando Auto Museum.

Emigrating from Cuba to the United States of America isn’t easy, and so migrants sometimes attempt to make the journey on their own. In 2003 the US coastguard came across a strange vessel just 40 miles from the American coastline carrying 12 passengers. Upon closer inspection, this was no boat, but a 1951 Chevrolet truck converted into an amphibious vehicle!

Make New Friends On The Water With This 1962 Amphicar 770

The truck featured a bow to break the waves, hollow barrels running its length for buoyancy, and life rings should anything go wrong. Amazingly, this homemade creation worked flawlessly with its driveshaft hooked up to a propeller capable of pushing it through the water at a steady 8mph — something it did for 31 hours before being apprehended.

Sadly, the original amphibious truck was sunk after it was confiscated, however, a Chevrolet dealer in Miami decided to create a replica to honor the incredible crossing made. A similar truck was donated to the cause, with $100,000 being spent to create an accurate incarnation. It spent some time outside of Maroone Chevrolet of Miami before being put on display at the Orlando Auto Museum.

This replica truck had a lot longer than the six hours it reportedly took the Cuban’s to build the original, and it serves as a great homage to that incredible voyage.

The Orlando Auto Museum currently has the Cuban Mobile replica listed for sale at $39,995. It would certainly get the neighbours talking should it find a new home on your driveway.