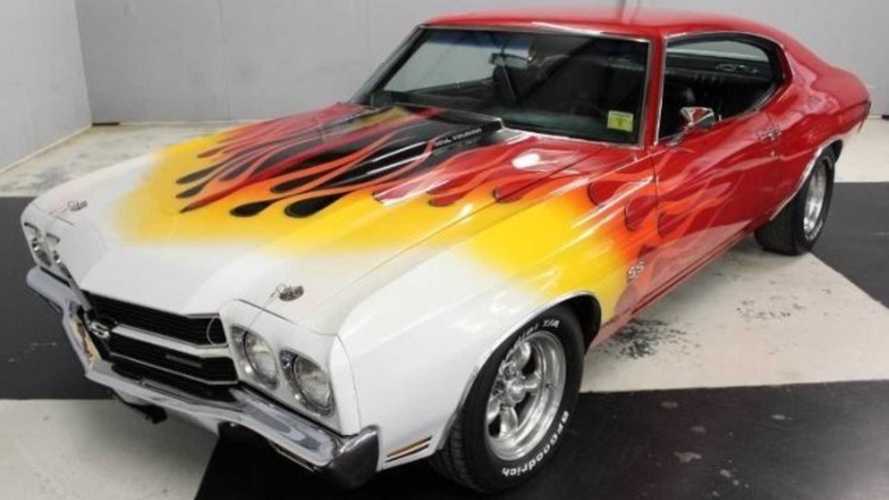 This muscle car has the power to justify its distinctive paint job.

The Chevrolet Malibu is an enduring nameplate that has spanned some 55 years, first starting as a trim level on the Chevrolet Chevelle in the 1960s. To day the Malibu is its own standalone model, and is a very different proposition to its ancestors. Its golden era was arguably as part of the second generation Chevelle, most notably in performance oriented SS form such as this example up for auction with Raleigh Classic.

If you’re looking to stand out from the crowd, look no further! This Chevrolet is finished in a classic red shade with traditional dual black stripes, but also provides the canvas for some distinctive West Coast Flames. Highly polished and wearing just the right amount of chrome, this iconic muscle car is in excellent condition. Details such as hood pins, five-spoke wheels, and white text on the tires complete the muscle car look.

This 1970 model was actually amongst of the first updated second generations cars that featured squarer facias. Real die-hard US car fans might spot that some of the new sheetmetal is identical to that found on a Buick Skylark GSX of the same period. The Chevelle is a well established model on the muscle car scene, but its roles in some of the more recent Fast & Furious movies has resulted in a surge of popularity.

Worried that this model is all show and no go? Under that distinctive hood is a monstrous 454 Ci V8 motor that promises to deliver on performance. It is supported by Holley carburetors and Hooker headers, in addition to looking fantastic with additional chrome work. A turbo 400 transmission is connected to a hardy 12-bolt rear end.

The interior needs a bit of TLC, but is more civilized with black vinyl upholstery and a few added luxuries such as power steering and air conditioning. It’s a spacious cabin with a large rear bench, but the Chevelle’s lack of B-pillar means that more natural light can enter.