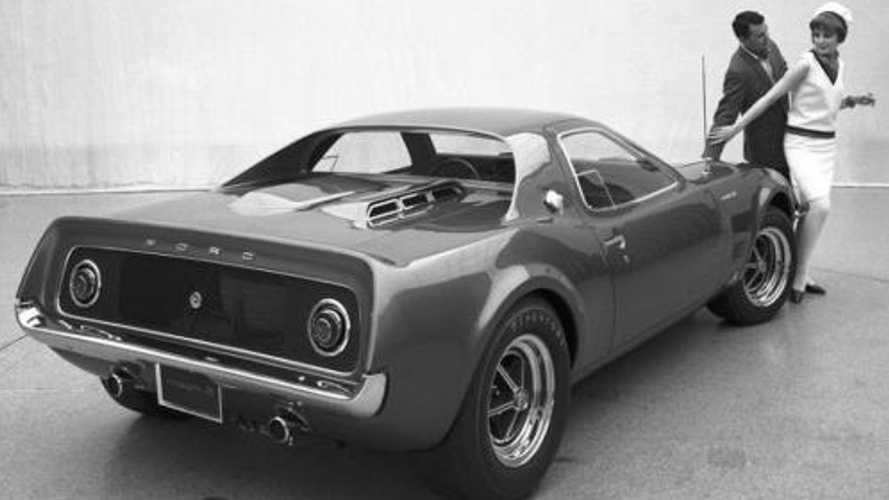 The up and coming mid-engined Chevrolet Corvette is arguably the industry’s worst kept secret. But General Motors is far from the first American manufacturer to think about doing such a thing. Ford toyed with he idea of a mid-engine Mustang way back in the late 1960s. This is the story of the Ford Mustang sports car that never happened.

With the 10 millionth Mustang rolling off the production line last year, it’s hard to imagine a world where this celebrated icon is anything other than front-engined and rear-wheel drive. However, Ford considered many variations of the muscle car, several of which never made it to production. Conceived as a design and engineering study that could potentially replace the Shelby Cobra, the Mustang Mach 2 concept envisioned the pony car with the engine behind its occupants.

Ford’s chief designer Eugene Bordinat got to work taking the design language of the original Mustang and applying it to a mid-engine GT model. After many sketches and some clay modelling, a running show car was built by Ford performance contractor Kar-Kraft and used a convertible Mustang as its base.

But why a convertible? The structural elements added to prevent the convertible flexing reinforced the chassis in key areas useful to the Mach 2. It featured the same 289ci V8 available in the standard car, but placed it where the rear seats used to be. Costs were also kept low by using the same front suspension as a standard Mustang.

The Mustang Mach 2 made its debut at the 1967 Chicago Auto Show and went down a storm. Here was an American car that was every inch as stylish as its European counterparts and far more interesting than what its rivals had brought to the show. It was a handsome thing that featured pop-up headlights, a shoulder-mounted gas cap, and a wedged nose instead of the Mustang’s traditional blunt affair.

Two Ford Mustang Mach 2 cars were built, a red show car that was fully road legal, and a white development car. Some journalists were invited to briefly sample the Mustang in action at Ford’s Dearborn Proving Grounds, with its on-road ventures making the red car something of a local celebrity. However, Ford executives ultimately killed the project on the basis of its complexity and overall cost. The cruelest part of this tale is that both prototype cars were ordered destroyed to keep them out of competitors hands.

Amazingly, the Mach 2 story doesn’t end there, as one final mid-engine concept car, dubbed Mach 2C, was built at the behest of new Ford designer Larry Shinoda. It was a larger vehicle that made use of a big-block V8 engine but, as evident by the lack of a mid-engined Mustang today, this project was also killed off.

Ford never did, and maybe never will, reinvigorate a similar Mustang project. That said, cars such as the new Corvette finally making good on the dream of an affordable mid-engined American sports car might change its mind.