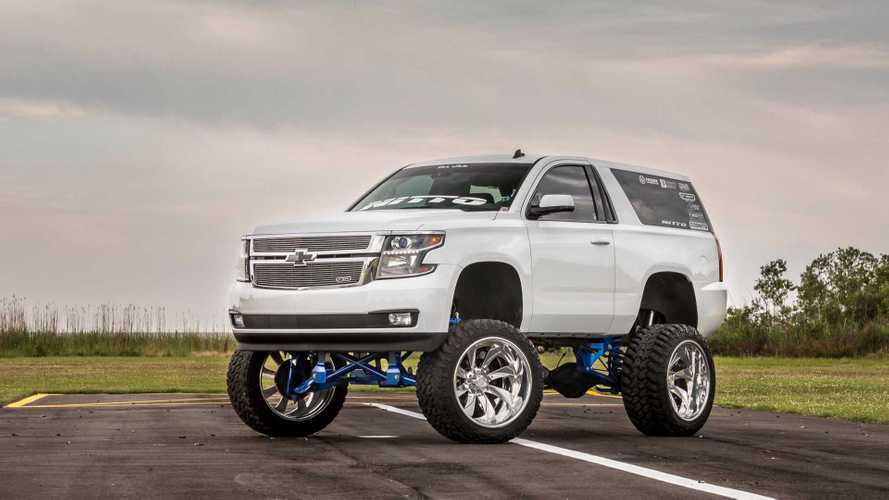 Meet the truck that broke the internet. Originally a small team-based project, fabricated to raise a few eyebrows, this 2015 Chevrolet Suburban instead shot to fame as the forum’s hottest topic. Built as a modern interpretation of the retro two-door Chevy Tahoe, offering a culture clash between new and old, this one-off project attracted no end of sponsorship and enthusiast attention. Now it could be yours!

Offered for sale by Memphis’ Art & Speed Classic Car Gallery for $92,900 (or $1066 per month), the bespoke SUV captures the best of both worlds. Boasting a high-tech modern interior with the nostalgic styling of the GMT400 (Tahoe/GMC Yukon), the truck evolved over time as an original vision by Jeff Phifer.

Butchering an almost new Chevrolet Suburban and shortening the chassis, adding a lift kit and 33-inch tires into the bargain, word of the project was fast to spread. Upon reaching the president of an automotive design company, product sponsors were offered should the truck be entered into the Battle of the Builders at SEMA. As you can see from the pictures, things kinda snowballed.

There is nothing old-fashioned about the interior, however. Besides the factory-fitted steering wheel with controls, power front seats, tan interior, air conditioning, and sound system with touch screen navigation, Jeff shoehorned further decadent luxuries into the cabin.

Phifer explained that ‘it attracts waaaaaaay more attention’ than anything else he’s ever worked on – including various bagged trucks with duallies and graphics, and $200k supercars. Not to say that the creation hasn’t gained itself criticism from armchair quarterbacks.

Certain gearheads may have targeted the Tahoe Suburban with comments of abhorrence, but those in the industry recognise the team's efforts with sheer respect. Those on the cutting edge of custom vehicle design have personally extended their compliments and recognition, including The Muscle from Diesel Brothers and Topo: The Widebody King.

Boiled down, this 2015 Tahoe Suburban resides as an act of passion. Concocting the perfect balance of contemporary technology and styling with an age-old mantra, the project was never about money or an overwhelming social media presence. As a skilled professional, Jeff simply wished to craft a tailor-made truck with a difference.

With the truck currently parked off the main drag but still in view, Art & Speed Classic Car Gallery has enjoyed no end of public interest in the 2015 Chevrolet Tahoe Suburban SEMA build. If it’s calling you, then you better act on it, for it won’t hang around for long. Get a closer look here.

Only Six Of These Top Whack 1969 Chevrolet Biscaynes Ever Existed

1965 Chevrolet Corvette Pro-Street Will Blow You Away!