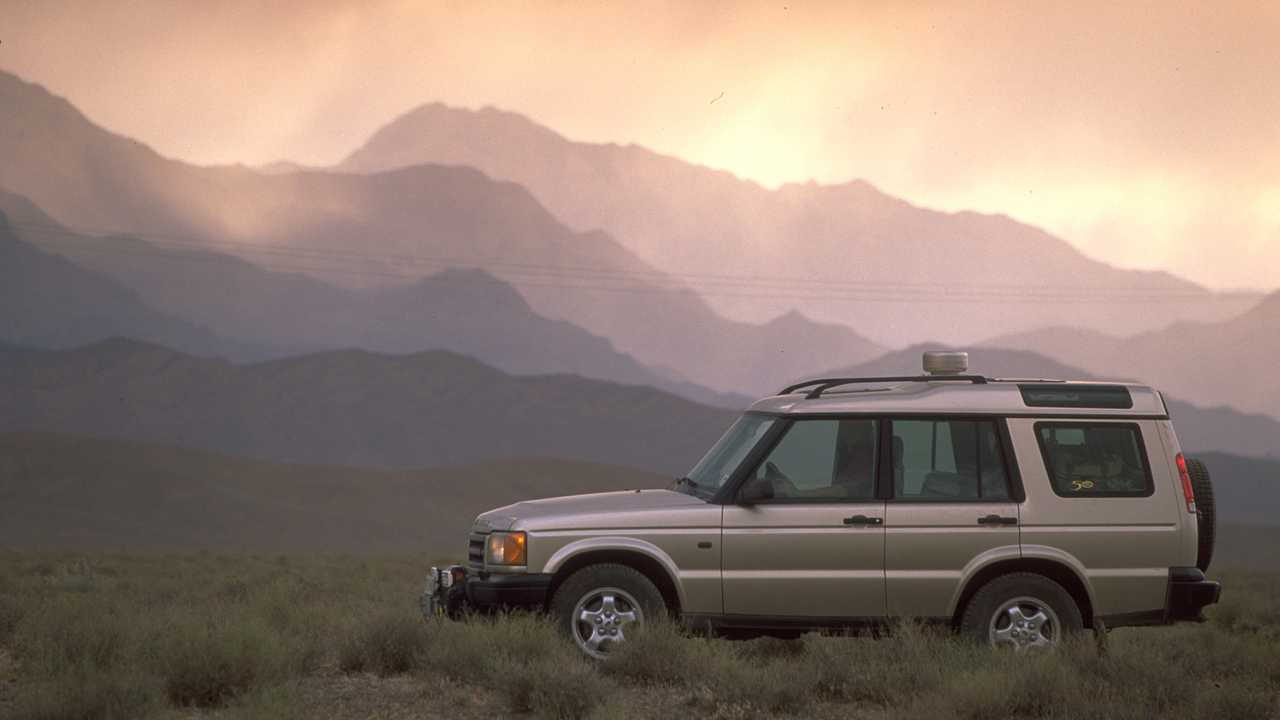 We remember when these models were new! Check out the significant milestone anniversaries these Land Rovers have for 2019

Four anniversaries sure to resonate with Land Rover enthusiasts the world over will be celebrated at the upcoming 2019 Land Rover Legends show.  The event is due to take place over the weekend of Saturday 25th and Sunday 26th May at Bicester Heritage, a former WWII RAF station in Oxfordshire UK, which has hosted numerous historic motoring events in recent years.

Featuring dozens of major Land Rover and Range Rover club displays, stimulating exhibits and a diverse range of demonstration vehicles, the show invites fans of the Green Oval to bring their own Land Rovers along as well as the family, and for the first time this year, even the dog!

How To Survive Jurassic Park: Use A Land Rover NAS V8

Is The Land Rover Freelander A Modern Classic?

How A Battered Range Rover P38a Helps Me Cope With Autism

Other new event features include on-site camping and Saturday evening entertainment, in addition to the yearly deluge of Land Rover restorers, specialists and associated suppliers who will be on hand to compare, advise and supply all you’ve currently got waiting on your Land Rover wish list.

In anticipation of this ever-growing event, Motorious just couldn’t help but delve into the four iconic anniversaries that Land Rover are celebrating this year ...

50 Years of The Pink Panther

One of the most eye-catching Land Rovers, celebrating an anniversary of no less than fifty years, is the Series IIa SAS Pink Panther.  Sporting a surprising array of military hardware in combination with a light pink colour scheme, this is a vehicle that usually takes some explaining to those unfamiliar with camouflage theory.

Tailored specifically for special ops missions and long-distance reconnaissance in the Oman desert, seventy-two 109-inch Series IIa Land Rovers were converted by Marshalls of Cambridge to assist the SAS in their desert duties.

Fitted with a heavy-duty chassis and springs to cope with particularly rough terrain, these Series IIa Land Rovers also possessed four fuel tanks that could carry a total of 100 gallons as well as sand tyres, a smoke grenade launcher, rifles, machine guns, a flare gun, search lamps, sun compass, hand grenades and an anti-tank rocket launcher.  Despite the removal of doors and windscreen, these imposing vehicles weighed a mighty three tonnes each!

As you might expect, Land Rover delivered their modified Series IIa vehicles in standard green livery but the SAS soon repainted many of them in a light shade of pink, which led to the nickname of ‘Pink Panther’ or ‘Pinkies’.

This unlikely choice stems from WWII tactics that employed pink colouring on various military vehicles, including aeroplanes and Navy ships, as it was thought this made it difficult to pick out targets that were painted in this colour during dawn and dusk.

The SAS discovered this for themselves when they happened upon a plane that had been shot down during WWII.  After many years of exposure within the desert, the metal had worn pink and, from a distance away, the plane was very difficult to see.

Years after this observation, SAS ‘Pink Panther’ Series IIa Land Rovers served in desert patrol for almost two full decades, before finally being replaced by the 3.5-litre SAS V8 Desert Patrol Vehicle in 1984. Of the 72 Pink Panthers that served, 20 are known to survive - with one currently for sale here.

The engines and gearboxes were borrowed from the popular Range Rover Classic while the chassis length was a one-off, specific tailoring for these military prototypes.  Most came fitted with twin fuel tanks and a 24V screened electrical system.

Despite not being sold to the public, many enthusiasts have taken inspiration from these unusual prototypes and created their own take on the 100-inch wheelbase Land Rover.  These ‘shed-built’ hybrids are usually based on a modified Range Rover or Discovery chassis, combined with Land Rover body panels.

Of the original prototypes, it is believed that only three survive now, making them incredibly rare. This year’s Land Rover Legends event will be celebrating these unique prototypes and some of the hybrids they continue to inspire.

Unlike many a person in their late-twenties who tends to shirk away from the approach of their 30th year, the Land Rover Discovery sees this notable anniversary approaching and decides to face it head on.

Launched at the 1989 Frankfurt Motor Show, the Discovery quickly became an incredible success, with the model remedying sales that had been dwindling throughout the mid-1980s.  The Discovery effectively revitalized and kept the Solihull marque going.

At first glance, it was unclear as to why sales had been dropping.  After all, Land Rover had previously sold the legendary Series models with great success as well as the utilitarian 90 and 110 models still on offer. The impressively luxurious and competent Range Rover was also performing strongly with high-end consumers.

However, new competition from Japan, including the Isuzu Trooper and Mitsubishi Shogun, had snared enough of the 4x4 market’s interest to also gain Land Rover’s attention.

It became clear that Land Rover needed a vehicle that could deliver the rugged off-road capabilities of the Series and Defender models, combined with an element of luxury that would be more familiar to drivers of the Range Rover.

Codenamed Project Jay, the Discovery’s aim was to provide a more affordable, mass-market SUV that would appeal to a new generation of ‘lifestyle-orientated’ consumers, most of whom were usually slightly younger and in more need of family-based transport than more traditional drivers of Land Rover’s fleet.

The Discovery was an alternative take on what we now refer to as the Range Rover Classic.  Despite being significantly cheaper, the Discovery used a significant proportion of the more expensive Range Rover’s components including the chassis, drive train and body frame.

Early models were released as 3-door bodies with the choice of either a 2.5-litre turbo diesel or a 3.5-litre V8 petrol engine.  A staggering 90% of initial buyers opted for the 111bhp diesel thanks to it surprisingly economical return of 30mpg.  The 154bhp V8 sounded great but was often considered too thirsty at the fuel pump.

Like its cousin the Range Rover Classic, the Discovery’s combination of generous ground clearance and coil springs allowed it to iron out rough terrain and problematic potholes as if they were never there.  Gearboxes initially came as five-speed manuals, incorporating both high and low-range ratios, while four-wheel drive and a lockable centre differential worked to direct torque to where it was needed, visibly improving traction on tricky surfaces.

The five-door version was released in 1990, before automatic transmission also became available two years later.  In 1994, twin airbags enhanced the Discovery’s safety at the same time that the diesel engine became more refined and the front grille was modified to include larger headlamps.

Meanwhile, the interior benefitted from an update courtesy of Sir Terence Conran, while new ‘ES’ specification offered extra luxury finishes such as leather upholstery and air conditioning.  Further trim options – the XS and GS – followed. Some 700 Argyll special editions appeared in 1997 before the Discovery then evolved and re-launched as the Mk2 the following year.

Today, the fifth generation Discovery continues to sell strongly on Land Rover forecourts, while an ever-growing band of classic enthusiasts discover and embrace the practicality of the Mk1, which kick-started the easily recognised and now iconic Discovery Series.

Despite handsome bodywork that belies its age, to many a Land Rover enthusiast’s surprise, twenty-five years have passed since we first became acquainted with the Range Rover P38a.

Taking its unusual name from the number of the building within which it was developed at Solihull, the P38a had big boots to fill thanks to its role as successor to the Range Rover Classic.  The angular bodywork looked remarkably familiar, while the front headlamps had become rectangular and housed within an imposing grille.

Reactions were mixed when the P38a was launched.  It was a remarkably proficient performer off-road despite its hefty dimensions and internal emphasis on refined luxury.

The P38a defied the age-old thinking that in order to successfully traverse difficult topography you somehow had to compromise on comfort and features that make day-to-day driving more pleasurable.

With the P38a, you could literally climb mountains while kicking back on some of the most comfortable seats the motoring industry had to offer along with air conditioning, an expensive stereo and premium trim abound.

The motoring press eagerly lapped up the chance to test the new Range Rover whenever they could. Advertisements showed the P38a driving through a brick wall as if it simply wasn’t there and Land Rover keenly demonstrated their new height-adjustable air suspension, which now came as standard.

Sales were strong, but every now and then, a grumble was heard that it wasn’t the original Range Rover, now commonly referred to as the Classic – Land Rover simply took the fact that their initial offering had stolen hearts so effectively, as a compliment, as this affection temporarily blinded some to the technological advances in the P38a.

Unfortunately, some electrical niggles gate-crashed what was set to be a glowing honeymoon period for the P38a, resulting in the model temporarily carrying a somewhat undeserved reputation for poor reliability.

However, with some time and patience, the vast majority of those issues are now understood and are able to be remedied with relative ease.  This has allowed the P38a, as it thunders into classic status, to bask in renewed appreciation for its impressive capabilities on and off-road as well as its remarkable comfort levels and that perceivably charismatic persona.

You can find out more about the upcoming Land Rover Legends here.