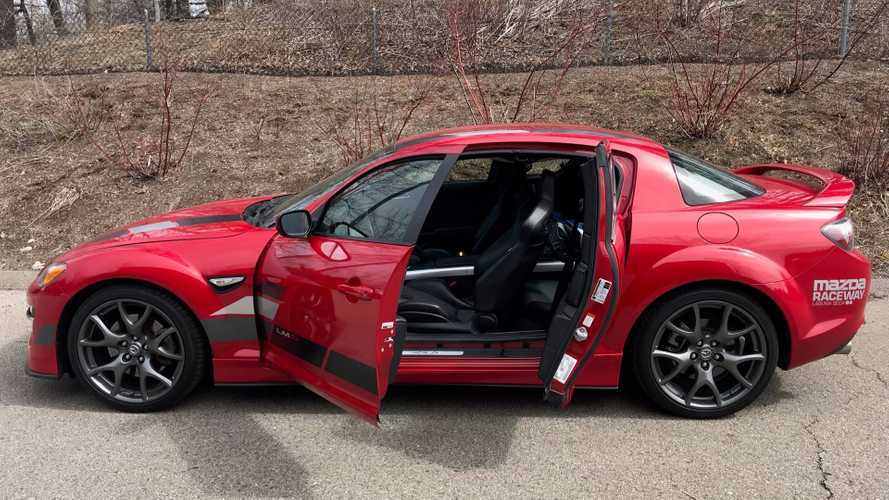 ...and this one could be yours! As the other is owned by Mazda's museum, this is your only chance to bag the ultimate RX-8

Mazda’s RX-8 did things differently. While rival manufacturers observed culture’s pack mentality, in regards to cylinders, displacement and running gear, Mazda’s last rotary-engined sports car broke with convention. In essence, the RX-8 was tailored towards clientele who found automotive conformity something of a drag.

Having suffered the recesses of a turbulent second-hand market, the RX-8 now brings unique character to a crowded collector car scene. None more so than the insanely rare LeMans 20th Anniversary model, of which only two were ever made.

Crafted by Mazda to celebrate the 20th anniversary of their 1991 LeMans win, one example of the celebratory model is permanently housed in the Mazda Museum. The other? Well, that’s just surfaced on the market with Classic Motorcars for $27,500.

The specimen offered here was used as the press car for promotional material. It also featured heavily during the 2011 Pebble Beach Concours, upon where Mazda flaunted their racing heritage to society’s elite. Boiled down – this is the sole publically available specimen of Mazda’s ultimate RX-8.

With only 29,000 miles on the clock, the LM20 will drive like new. That means you’ve got 232 horses to play with at 8500rpm, working in tandem alongside 5500 lb-ft of torque. Boasting of a six-speed manual gearbox and real-wheel drive set-up, the Mazda sports all the credentials as an out-and-out driver’s car.

As an added bonus, the LM20 resides in perfect health. While the RX-8 remains infamous for exploding when mistreated or driven without mechanical sympathy, Classic Motorcars have perhaps the most solid specimen on the current market.

You’ll find no plumes of oily smoke from the exhaust, nor any knocking noises from the engine. The cabin also appears to be in immaculate condition, with every aspect of the vehicle gleaming as though factory fresh. Even the bespoke decals down the bodywork are blemish free.

Besides serving up a drop-dead gorgeous stance and the driving experience of a lifetime, as the ultimate incarnation of Mazda’s rotary engine, this would be a solid addition for any serious collector. The concept that it was Mazda’s final rotary car only sweetens the deal. Get a closer look with Classic Motorcars here.