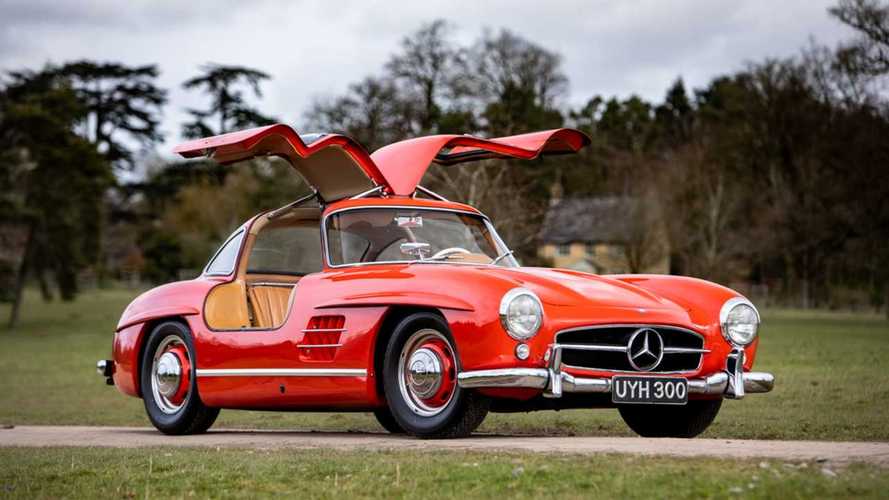 Silverstone Auctions always attracts high caliber lots that are often fought over by collectors. The up and coming event at Silverstone Classics is on home turf for the British auction house, and so it has selected a very charismatic (German) machine to headline the sale. Feast your eyes on this early 1954 Mercedes-Benz 300SL Gullwing.

These Gullwing models are always an impressive sight, but this car even more so due to its great condition, and status as one of the first produced. Early examples of the 300SL feature ‘full belly pans’ of which are highly sought after amongst collectors. In total, just 1400 300SLs were ever built.

This example isn’t totally original, although it wouldn’t take too much work to return it to factory specification. It was delivered new on 27th December 1954 to New York, wearing a traditional shade of Mercedes Racing Silver. However, it has subsequently been repainted Fire Engine Red and hosts a camshaft upgrade. Another alteration includes the addition of electric power steering.

The car has been well maintained by specialists over the years and comes will an extensive history file. An interesting footnote in its past is that the Mercedes was owned by former Lotus Team Manager, the late Peter Warr. He owned the car for four years from 1989 to 1993. Its current custodian has cherished the car for the past 26 years.

Far from a garage queen, this Gullwing has taken part in many European tours through Spain, Portugal, Italy, France, and Monaco. It has also competed in the Ecurie Ecosse Scottish Tour an incredible 12 times.

Nick Whale, Managing Director of Silverstone Auctions said: ‘We are privileged to offer this car fresh to market from the same private ownership as the 300SL Roadster that we sold at the Silverstone Classic in 2018.’ He continued: ‘It has clearly been loved and cherished by our enthusiastic vendor who is now ready to let the car enjoy its next chapter.’

The Mercedes Handbuilt By Porsche’s 959 Factory